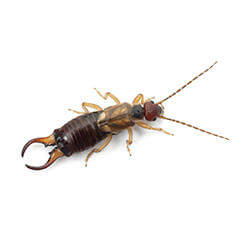 There are several species of earwigs, with the European earwig (Forficula auricularia) being the most common in Canada. As the name suggest, it was first introduced from Europe and is now well established in North America. It is dark-red in colour with prominent pincer-like appendage (cerci) at the tip of its abdomen. It measures about 16 mm long, with pale yellow wings and legs. The antennae are long with 12 segments. In preparation for flying, earwigs have been observed to climb as high as possible before taking flight. However, they do not typically fly and prefer to run from one place to another.

Why do I have earwigs

The European earwig seeks out dark places rich in moisture, so often rest under tree bark or beneath stones. However they are also attracted to the narrow cracks in foundations, under floorboards, and in other tight spaces around the home.

Damp and dark basement areas with multiple cracks in the foundation provide perfect hiding places for earwigs. Garbage and refuse may also attract earwigs, as will piles of leaves, vegetation, and mulched areas.

When foraging at night, earwigs like to feed on dead or decaying vegetable matter, dead insects, spiders, aphids, caterpillar pupae, and other small invertebrates. They use their cerci to grab and hold prey, including, before bending back to move the food to their mouthparts.

How worried should I be about earwigs

It’s a common misperception that earwigs crawl into the ear canal of sleeping humans and bore into their brains. In reality, earwigs do not attack, however when defending themselves, they may give a short nip and discharge a foul-smelling yellow brown liquid.

The earwig can be beneficial, since it aids the decomposition of detritus and feeds on destructive insects – but it can also feed on flowers, vegetables, ornamental trees, and shrubs. In large enough numbers, earwigs can eventually kill healthy plants.

An infestation is not easily tackled, as earwigs release a pheromone in their feces to attract other earwigs to the spot. Even if you kill existing earwigs, more could be on the way. To be truly sure you’ve eradicated your earwig infestation, contact a professional pest control service.

How can I prevent earwigs invading

Remove any decaying vegetation around, Clear leaf piles, grass clippings, and compost, Fix leaky downspouts and reroute drains, Repair broken irrigation systems, Seal cracks and crevices in foundations, walls and around doors and windows. You can find more information on earwigs in our blog post about How to Get Rid of Earwigs.

Other pests related to Earwigs