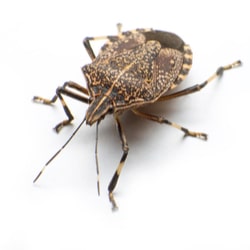 How to identify Stink bugs

Adult stink bugs have a carapace which is shaped like a shield. Most Canadian species range in size from 14 to 19 mm in length and are usually about as wide as they are long. As indicated by their name, brown marmorated stink bugs tend to be different shades of brown in colour, with lighter bands on the antennae and darker bands on the body. BMSBs also have distinguishing patches of small, rounded, coppery-blue depressions along the head and pronotum. Green stink bugs, on the other hand, appear bright green in colour with a border of narrow, orange-yellow lines, while brown stink bugs are brownish-yellow.

Prior to moving indoors during September and early October, stink bugs frequently congregate on exterior walls that receive ample sunshine. Adult stink bugs are also commonly spotted around light fixtures, on draperies, or crawling along walls. One of the most telling signs of an overwintering stink bug infestation occurs on warmer winter days, when the pests emerge from their hiding places in the home to congregate on indoor walls.

Removing a stink bug infestation from the home can be accomplished with a vacuum cleaner. Crushing the bugs releases their unpleasant odour, but vacuum cleaners eliminate the potency of the smell. Locating and sealing the point of entry is also an important component of stink bug removal. For particularly serious infestations, call a pest management professional who will use appropriate tactics to control the infestation.

How to prevent Stink bugs from invading

The best way to prevent a stink bug infestation is to eliminate access to the home. In order to do this, cracks in the foundation should be sealed with caulk or a similar substance, and damaged screens should be replaced in windows and doors. Homeowners should also check siding, utility pipes and chimneys for cracks and seal off the openings appropriately. Additionally, trimming down outdoor vegetation may discourage stink bugs from inhabiting yards and consequently moving into homes.

Although stink bugs live throughout the cooler parts of the United States and lower Canada, they thrive in temperatures of 21º C or above. Stink bugs are active during spring and summer, and migrate into homes and buildings around September and October to overwinter. The insects often seek shelter in tree bark, weeds, and similar outdoor environments during the warmer months.

Developing by way of gradual metamorphosis, stink bugs hatch from eggs and subsist as nymphs before reaching adulthood. Adult females lay as many as several hundred eggs apiece in mid to late June, usually on the stems or leaves of plants in clusters of about 36. Once the nymphs hatch, they go through five molts before becoming mature adults. The development process takes approximately five weeks, and adults live for an average of eight months. Depending on the temperature and other environmental factors, the pests can produce up to four generations a year.

Why do I have stink bugs?

There are more than 260 species of stink bug in North America, including the brown marmorated stink bug, which is considered to be an invasive species. Other common stink bugs include the green stink bug and the brown stink bug.

How worried should I be about stink bugs?

Stink bugs contaminate and render unmarketable the crops they consume, creating undesirable discolouration and distortion known as cat facing, so are considered a major agricultural pest.

When crushed underfoot or disturbed, the bugs emit a foul odour, which can trigger allergic reactions like rhinitis or conjunctivitis.

Stink bugs can reproduce quickly, with females laying several hundred eggs each summer and stink bugs developing from egg to adult in only five weeks. In the right conditions, they can produce four generations every year.

A stink bug infestation can quickly get out of hand, so to ensure it is eradicated completely, it is best to get the help of a professional pest control service.

Other pests related to Stink bugs