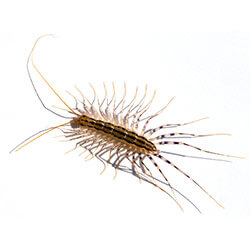 How to identify Centipedes

Centipedes are segmented arthropods and their leg count typically ranges anywhere from 30 to nearly 400 limbs. Each of their body segments has a pair of legs slightly longer than the pair before it, which helps the pests move quickly.

As they do not typically leave lasting signs of infestation, damage buildings, or contaminate food, centipede infestations may go unnoticed for some time. The best way to determine if centipedes are present is to look for them at night when they’re most active. Homeowners might also find molted exoskeletons given a present infestation. Dark, secluded areas in basements, under cabinets, and collections of firewood are common places for centipedes to congregate.

How to prevent Centipedes invading

Females lay eggs in underground nests. When young centipedes hatch, they look like smaller versions of adults, though they have fewer legs. Immature centipedes grow additional body segments and legs as they age, going through several developmental molts before reaching adulthood.

Why do I have centipedes?

There are more than 70 species of centipedes in Canada, and while most do not interact with humans, house centipedes commonly invade homes to escape dry conditions outdoors or cold weather.

Centipedes congregate where there are large amounts of insects and seek out dark, damp places with plenty of small crevices and cracks, like basements, garages, and mulched gardens.

They prey on other household pests, including spiders, beetles, moth larvae, ants, and worms, but will also prey on other centipedes. As predators, they ambush and then disable their prey by catching them in poisonous claws.

How worried should I be about centipedes?

Although they possess venom potent enough to paralyze and kill insects, centipedes do not bite humans unless grabbed or accidentally stepped on, and their venom is not toxic enough to be dangerous. However, their presence is unsightly and they are considered a nuisance.

Due to the persistent nature of centipedes, their ability to navigate very small cracks, and the fact their presence may indicate an insect problem, it is essential to get the help of a professional pest control service to eradicate them and any other infestations.

Centipede infestations in homes may indicate the presence of underlying insect problems.

What is the difference between centipedes and millipedes?

Though centipedes and millipedes seem the same, the pests share few common traits. A centipede has a flat body with a single pair of long legs per segment. Millipedes are longer and have rounded bodies with each body segment bearing two pairs of short legs. A millipede has a distinctly different appearance and far more legs than a centipede. Commonly found in garden soil, millipedes are dark coloured with rounded bodies. They have two pairs of legs on each body segment rather than the centipede’s single set. Depending on the species, a millipede can have up to 400 legs.

In addition, millipedes vs. centipedes cause different problems for homeowners because their diets differ. Millipedes feed on decaying matter. These garden pests live in the soil, attacking roots and stripping stems on young plants causing plant damage. Some millipede species also secrete a fluid that irritates skin and leaves an odour.

On the other hand, centipedes gather in dark, dank spaces like basements and bathrooms. They feed on insects, so their presence may indicate a more serious infestation is afoot. Also, their darting movements and disturbing appearance tend to cause panic.

Since both pests prefer humidity, homeowners should reduce moisture levels to keep millipedes and centipedes away.

Other pests related to Centipedes