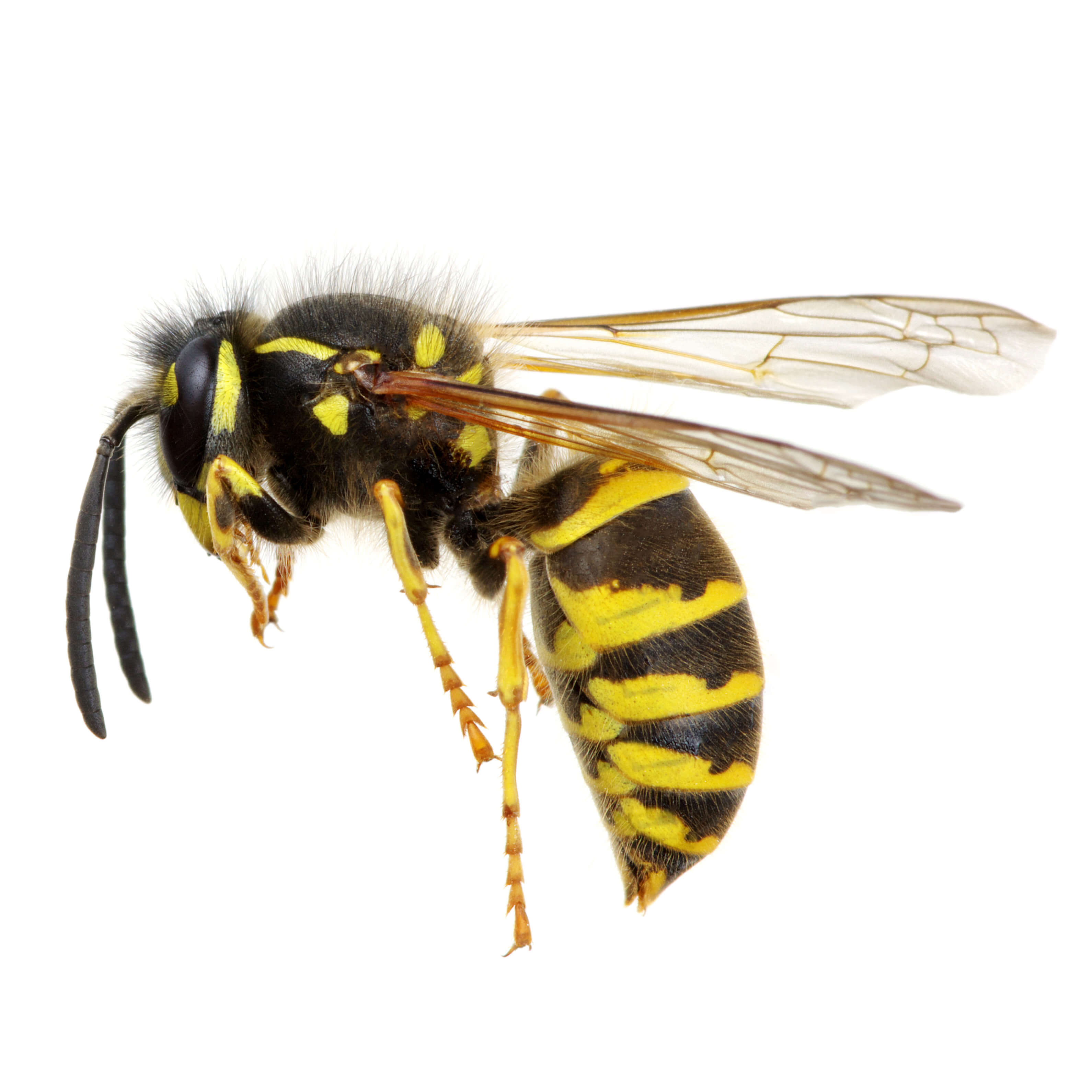 How to identify Wasps

A typical wasp is hairless, unlike common species of bees. Wasps possess three distinct body parts: head, thorax, and abdomen. The thorax is joined to the abdomen by a constricted petiole giving the appearance of a thin/slender waist. The thorax has three pairs of legs and two pairs of membranous wings which are used for flying. Like most insects, the head bears mouth parts, sensory organs, compound eyes, and segmented antennae. The last segment of the abdomen in female wasps is modified into the egg-laying ovipositors. The body size and colour of a wasp varies depending on species. Yellow jackets and hornets are stout and very colourful with bold yellow, white, and black markings on their bodies and faces. Paper wasps on the other hand are relatively long and thin-bodied (16 – 25 mm), long-legged, and have yellow-reddish and black markings. Mud daubers are very distinct, with very long bodies, 13 – 25mm long, with either long or stalked abdomen. Compared to other wasps, mud daubers are not so colourful; they are mainly black with occasional pale-yellow markings.

Wasp nests can be found in numerous areas in and around homes. For instance, paper wasps tend to build aerial nests that hang from trees, the eaves of roofs, and even around decking or playground equipment. On the other hand, most types of yellow jackets build their nests in the ground, using old rodent burrows or protected areas under shrubs and rock piles. Identifying the species present is important for proper wasp nest removal.

These pests are aggressive and will sting to defend their nests. Those with allergies to wasp venom can suffer severe reactions if stung. In order to avoid wasps, following basic prevention practices can help:

It is common to discover nests unexpectedly when doing yard work like mowing the lawn or cleaning gutters. Although it may be tempting to try do-it-yourself control methods, wasp nest removal is best left to professionals. While many home remedies for wasp nests put homeowners in danger, the pest experts at Orkin Canada have the proper equipment and training for safe and effective wasp nest removal.

How We Get Rid of Cicada Killers

We look for burrows and mounds of dirt that indicate the nest site. These are commonly found in areas of sparse vegetation, well drained soil, and full exposure to sunlight such as:

How to prevent Wasps invading

Wasp-proofing: Queens overwinter in protected shelters in homes and emerge the following spring to start new colonies. The new colonies generally begin in close proximity to where the queens overwinter. Homeowners should wasp-proof homes and property by inspecting, identifying, and sealing or excluding all potential entry points and protected sites, such as cracks in windows and doors, poorly sealed holes for ventilation lines, spaces in soffits, recessed lighting fixtures, or gaps leading to voids in walls or baseboards. Any opening a quarter of an inch or larger represents a potential entry point. Wasp-proofing prevents or reduces the chances of queens entering structures to overwinter and establish colonies the next season.

Habitat Modification: Denying wasps food generally leads to the insects moving on. Reducing or eliminating factors that attract and encourage other insects such as flies, ants, and spiders, which in turn provide food for the wasps, also eliminates potential infestations. Wasps like to nest in protected areas, so trimming back bushes, twigs, shrubs, and trees eliminates potential nesting sites. Remove old, non-active wasp nests from previous seasons to prevent infestation relapses.

Human Behaviour Modification: Homeowners should adopt practices which do not attract wasps. During outdoor activities such as picnics or parties, homeowners should keep all food sealed in airtight containers, clean-up spills promptly, and cover trash with tight-fitting covers. Store garbage bins no less than 50 feet away from vulnerable entry sites or outdoor activities. During summer months, outdoor garbage bins should be placed away from entrance ways and should be emptied on a daily basis.

Learn more on about ways you can prevent wasps.

It is important not endeavour to eliminate nests without proper guidance and knowledge. Call a professional pest control expert if you’re experiencing a wasp infestation in or around your home or business.

Wasp nests vary in shape, size and location depending on the species. Paper Wasps: Nests are constructed of paper-like material obtained by chewing and gluing plant material together. The nests are single layered, comb-like with no definable enclosure and consisting of 150 to 300 cells. The nests are stalked, attached to an object by a long stalks or stems called pedicel. Typical places where paper wasps attach their nests include fences, tree branches, twigs of trees and shrubs, eaves, door and window frames, exterior joists and soffits. Yellow Jackets and Hornets: Nests are also constructed of plant materials; however, they are multi-layered and consisting of five to nine combs with a total of 1,500 to 3,500 cells. The nests can either be exposed or protected in a paper envelope. Some yellow jack nests are the size of a soccer ball. Nests are typically found in hollow trees, wall voids, inside structures such as sheds, garages, and attics, and in trees and brushes. Some hornets and yellow jackets nest in ground. Ground nests are located typically in areas clear of vegetation. Mud daubers are solitary wasps. As the name suggests, mud daubers construct nests out of mud. A typical mud dauber nest is about 20-25 mm long. Such nests are generally plastered side by side forming a cluster of up to 100 to 120mm wide. Mud daubers like to build nests in sheltered sites, such as protected building structure and walls.

Most wasps primarily feed on nectar, fruit juices, or honey dew from plants. However, the most common wasp pests we encounter are primarily scavengers or carnivores that prey on other insects. Wasps are beneficial because of their predatory behaviour, which helps control insect pests in agricultural crops and gardens. The scavenger behaviour also draws wasps to human environments or activities where food is present, which makes the insects nuisance pests.

Wasps undergo complete metamorphosis before becoming adults. The full process takes approximately six weeks. After eggs hatch, the new larvae feed on insects brought in by stinging female workers for a few weeks. Larvae then enter the pupal stage, a cocoon-like period where immatures transform into adult wasps over several more weeks. The queen typically only produces workers at the beginning of the season, and the workers care for the young as the queen continues to lay eggs.

Wasp colonies reach peak numbers during the late summer and early fall. A reproductive generation of males and females is produced around that time of year. Males die shortly after mating, with the rest of the colony dying off as temperatures drop. Fertilized females, or queens, overwinter and lay eggs in the spring to begin new colonies. Female wasps often hibernate in areas of the house with less traffic such as attics, barns, garages, or other accessible storage spaces.

Why do I have wasps?

More than 500 species of wasps live in Canada, and most are social creatures that live in colonies ranging from half a dozen to 15,000 members. The most common pest wasps are hornets, yellow jackets, paper wasps, and mud daubers.

Paper wasps build single-layered nests from masticated plant matter and attach it to fences, branches, twigs, eaves, door and window frames, exterior joists and soffits. The nest may be exposed or protected in a paper envelope and will house up to 300 paper wasps.

Yellow jackets and hornets also build nests from masticated plant matter but these are multi-layered and located in hollow trees, wall voids, inside structures such as sheds, garages, and attics, in trees and brushes, or on the ground. These nests will house up to 3,500 yellow jackets.

Mud daubers are solitary wasps and build nests from mud in sheltered areas like protected building structures and walls. Such nests are generally plastered side by side forming a cluster of nests more than a metre wide.

Most wasps primarily feed on nectar, fruit juices, or honeydew from plants, but the most common wasps are scavengers, preying on insects and human food. Wasps are typically attracted by food, beverages, and garbage.

How worried should I be about wasps?

Wasps are beneficial because they prey on insect pests in agricultural crops and gardens, but if provoked, wasps can sting multiple times, potentially causing fatal anaphylactic shock in allergic individuals if not treated.

Wasps can be dangerous, aggressive and extremely territorial and removal of a wasp nest and eradication of a wasp infestation is best left to a professional pest control service.

The term wasp includes a broad category of flying insects ranging from paper wasps and mud daubers to the highly common yellow jackets and hornets found throughout Canada. The typical diets of wasps largely include other insects and arachnids. Wasps also feed on sweet liquids like nectars. Areas containing ready access to smaller, sustainable insects and spiders often appeal to wasps. Human food waste serves as a popular draw, as well. The social creatures often converge on trash cans located at schools, public pools, or other high-traffic outdoor parks where food consumption takes place. The insects take particular interest in the sucralose, sucrose, glucose, and other forms of sweeteners found in popular, modern food items, such as high fructose corn syrup-based treats or exposed and decomposing meats. Foods left out attract other insects, which provide both forms of preferred sustenance.

Preexisting burrows or former residences of small rodents or other tiny mammals can also attract wasps. Wasps prefer to build nests either underground or in shrubs, trees, or bushes. Many species of wasps assume homes or nests already burrowed out or created by other wasp or bee colonies or smaller mammals, as mentioned before. Sandy or bare soils prove likely to host wasp colonies. Voids in walls encased with soft materials like drywall or in abandoned vehicles also sometimes suit the needs of wasps for building nests. Large holes in trees typically represent another common location for wasps in Canada to reside.

Other pests related to Wasps