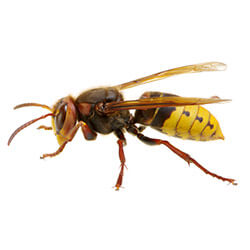 How to identify Hornets

Hornets are distinguishable from other types of wasps due to their larger size, painful sting, and hostile behaviour when threatened or defending their nest. Classified according to the location of their colony, the pests fall into two genera: Vespula and Dolichovespula. Vespula hornets build their nests into the ground or a similarly concealed site, while Dolichovespula hornets are aerial and situate their nests several metres off the ground. Hornets are social insects that are ultimately beneficial, as they help control pest insects. Although they may be aggressive, they do not attack unless provoked. If a nest is located in the ground and people in close proximity have a particular sensitivity to hornet stings, then they have to be controlled.

Like other insects, hornets have three body sections: head, thorax, and abdomen. The head bears relatively long, 12- to 13-segmented antennae. The thorax bears two pairs of wings, with the front ones being longer than the hind ones, and is typically covered in dark-coloured hairs. Depending on the species, hornets may be coloured black and white, black and golden yellow, or even black, yellow, and reddish-brown. The different species are easily distinguishable from one another based on the yellow or white and black markings found on the abdomen.

Homes and other buildings typically offer readily available shelter, food, and water. As a result, these structures are susceptible to hornet infestations during the warmer months. Any cracks in the building foundation, broken window or door screens, and similar openings give hornets access to attics and wall voids. When occurring outdoors, hornets construct nests that hang from eaves, tree branches, inside shrubberies, or tree hollows. People living in affected areas may notice the grey, papery nests or adult hornets in transit in the early to late spring.

How We Get Rid of Hornets

How to prevent Wasps invading

As hornets can travel significant distances and use flowers and other insects as food sources, preventing the pests from infesting is difficult. Before the fertilized females emerge after winter each year, homeowners should check for possible points of entry around the house. Sealing cracks with caulk and replacing ripped or broken screens is the best way to prevent a hornet infestation from occurring indoors. Additionally, pest control professionals can treat and remove nests safely.

Generally, hornets are drawn to urban environments and other populated areas. Many species of both aerial and ground-nesting hornets build nests either on or in manmade buildings and structures. Nests are often found inside wall voids, attics, in window frames, or hanging from eaves. In nature and on lawns, the pests will set up colonies in shrubberies, below ground, in hollow trees, under bark, and in rock piles.

The diet of an adult hornet mainly consists of fruit juices, honeydew, nectar, and other sweet liquids such as soda. Hornet larvae feed on the animal carrion, pieces of prepared meat, and bits of soft-bodied insects like crickets, grasshoppers, large flies, caterpillars, and even the workers of other wasp and hornet species that adults bring back to the nest.

Each fall, hornet colonies produce males and females that mate just before winter begins. The fertilized females are the only members of the colony that overwinter in protected locations. When the females emerge in the spring, they find suitable locations for new colonies and immediately assume the position of queen. The queen constructs a nest made up of a dozen cells; she lays and attends to the first batch of eggs. Until the first brood of workers is mature and ready to take over protection and expansion of the nest, as well as care for the young, the queen handles all responsibilities by herself. Canadian hornet species construct nests that typically end up containing an average of 100 to 400 individuals. The entire cycle repeats itself each year.

Why do I have hornets?

There are many species of hornets in Canada, but all can be divided into two categories – vespula and dolichovespula. Each have their own characteristics.

In the outdoors, hornets build nests in shrubberies, below ground, in hollow trees, under bark, and in rock piles. Nests usually house up to 400 hornets.

Around homes, they nest in wall voids, attics, in window frames, or hanging from eaves, gaining entry through cracks in the building foundation, broken window or door screens, and similar openings.

Hornets like to eat fruit juices, honeydew, nectar, and other sweet liquids like soda, but feed their larvae carrion, prepared meat, soft-bodied insects like crickets, grasshoppers, large flies, caterpillars, and even the workers of other wasp and hornet species.

How worried should I be about hornets?

Hornets are aggressive and very protective of their nests. If hornets detect a threat to the colony, they will inflict an extremely painful sting, which can cause fatal anaphylactic shock to an allergic person, if not treated immediately.

Although hornets can be beneficial by controlling other pest insects, some species can damage trees and shrubs by girdling branches for nest-building materials and sap.

As hornets can travel long distances, sting painfully, and use flowers and other insects as food sources, they can be difficult to remove and keep out. Only a professional pest control service can eradicate a hornet infestation and remove a hornet nest safely.

Why do hornets sting?

Hornets are aggressive and very protective of their nests. They sting when they detect a threat to their colony or nest. Handling a hornet will also lead the pest to sting.

Other pests related to Hornets