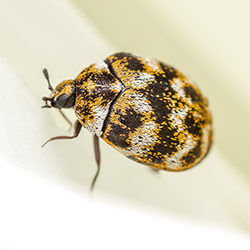 How to identify Carpet Beetles

The shape and size of carpet beetle larvae varies depending on species. However, most are elongated with varying degrees of tuft of hairs on the body. Colour ranges from dark brown to light brown. Black carpet beetle larvae are covered with short, stiff hairs and have a bristle-like tail, and the varied larvae are covered with dense tufts, which extend upright as a natural defense.

Though carpet beetles cause the most damage during the larval stage, the first and most apparent sign of infestation is adult beetles on windowsills. Similar to moths, larvae can be detected by irregular holes found in carpets, fabric, and the like. However, carpet beetles tend to eat a single, large area of a fabric whereas moths create tiny holes all over garments. Additionally, carpet beetle larvae leave cast skins while molting, which may cause allergic reactions and dermatitis in some highly sensitive individuals. 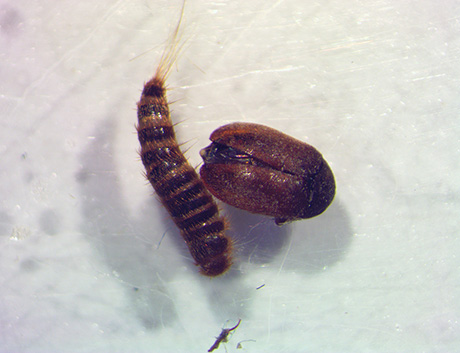 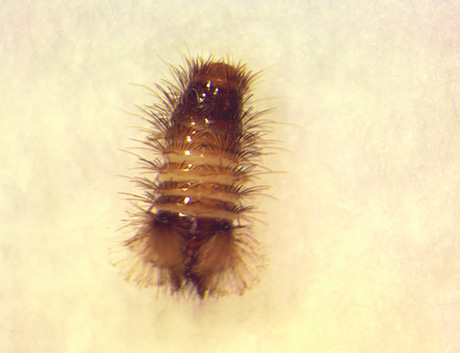 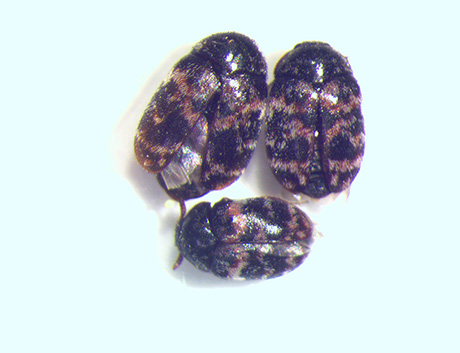 How to prevent Carpet Beetles invading

Adult carpet beetles are often carried into houses via plants and flowers, so regularly checking gardens and flora around homes and buildings may eliminate the risk of infestation. Cleaning out collections of lint, hair, dead insects, and other debris by vacuuming helps remove the food sources of larvae and may also kill any beetles already nesting in carpets. Checking window screens, doors, and vents for durability and removing spider webs, dead animals in vents and attics, and various nests inside and around buildings are effective deterrents, as well. Additionally, homeowners benefit from frequent cleanings of rugs, draperies, upholstered furniture, closets, and stored fabrics. If serious carpet beetle infestation occurs, calling a qualified pest professional is recommended.

Where Do Carpet Beetles Live

Generally, carpet beetle larvae prefer dark and secluded places. The insect often burrows in bird nests and other organic materials, such as trees and animal carcasses, when outside. Air ducts, collected lint, dry dog food, wool, and stored grains or spices often serve as both food sources and shelters while larvae grow indoors. Black and common carpet beetles do not fare as well in higher temperatures and are more prominent in Europe, the Northern United States, and Canada. While varied carpet beetles thrive further south, any place with warm buildings suits the insect. Adult carpet beetles prefer sunlight and populate gardens or other plant-heavy locations.

How Long Do Carpet Beetles Live

Carpet beetles undergo complete metamorphosis with four distinct stages: egg, larva, pupa, and adult. Females lay eggs directly on or near larval food sources, such as carpets, furs, wool, spider webs, animal carcasses, leather, and other protein-containing materials. Though timespans vary based on the type of carpet beetle and the temperature, the eggs hatch within an average of two weeks. The duration of the larval stage also depends on the type of carpet beetle species and temperature. Common carpet beetle larvae take between two and three months to reach pupation, varied carpet beetle larvae may need up to two years, and black carpet beetle larvae develop in the larval stage for six months to just under a year. Pupation for the beetles lasts around one to two weeks, and then adults live for an average of two months.

Why do I have carpet beetles?

Adult carpet beetles prefer to be in the open air, but are often carried into homes on plants or flowers. They like to lay their eggs in carpets, furs, wool, leather, birds’ nests, spider webs, and animal carcasses, all of which may be found in or near your home.

When these eggs then hatch into larvae, they seek out dark, dry, secluded places, like air ducts, collected lint, dry dog food, wool, and stored grains or spices.

These serve both as shelter and food for the larvae until they pupate and become fully grown carpet beetles, which can take anything from weeks to years, depending on the species.

How worried should I be about carpet beetles?

Carpet beetle larvae can leave irregular holes in carpets and fabric, and eating through whole chunks of wool, silk, feathers, and leather.

The bristly hairs found on carpet beetle larvae can cause skin irritation. Meanwhile, when they molt, their dead skin can cause allergic reactions and dermatitis in sensitive individuals.

Once you spot adult carpet beetles around your windows, it is usually a sign there are eggs or larvae hidden somewhere in your home – and it’s time to call professional pest control.

Other pests related to Carpet Beetles