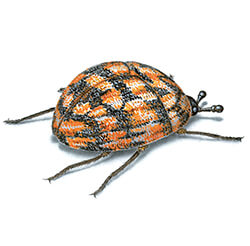 Types of Beetles in Canada

As beetles remain one of the largest groups of insects on the planet, species known to the North American continent remain plentiful. Certain families of the insect are more plentiful than others, and many commonly known beetles remain highly recognizable and even helpful to humans. For instance, the common ladybug, also known as a lady beetle, feeds on aphids and other crop-destroying insects, while species from the ground beetle family Carabidae prey on garden pests. Other species may prove more invasive and destructive. For instance, powderpost beetles infest man-made wood structures and wood products, often travelling to wherever homebuilding supplies go as unnoticed stowaways. Members of the carpet beetle family feast on furs, leathers, wools, and silk. Homeowners commonly mistake carpet beetle damage for property destruction caused by moth infestations.

Where do they live

There are more than 400,000 known species of beetle, and they live diverse lifestyles. Most tend to make homes on plants, but other can burrow and tunnel underground or in trees. Some species are also capable of swimming and spend most of their time in or around water.

Beetles can live in just about every environment, with the exception of the northernmost Arctic, as the weather proves too extreme for the insects to thrive.

A female beetle will lay eggs wherever she can find a good food source, such as in soil and wood, under bark, on leaves, or in carrion.

These eggs hatch into larvae or grubs. Beetle larvae are wingless and look similar to worms or caterpillars. They already have up to six simple eyes on each side of its head and mouthparts for eating – and they are voracious eaters, consuming anything that appeals to them.

The larvae then shed their skin to become pupae and grow into adults. When they emerge, these adult beetles look soft and pale, but soon develop a carapace, elytra, and pigmentation.

Depending on the species of beetle, the amount of food available, and the environment, it can take weeks, months, or even years for an egg to grow into a fully formed adult.

After that, their lifespans also vary massively, ranging from weeks to decades.

Why do I have beetles

Seeking food and shelter, they usually invade your home through cracks in the foundation or gaps around window frames and doors.

While many beetles like to avoid the cold weather by setting up home on your property, they have very varied tastes when it comes to food.

Some species of beetle are attracted by healthy trees, wooden structures, and wood products,, while others prefer carpet, furs, leathers, wools, and silk, or crops and stored food.

How worried should I be about beetles

Some species of beetle can be beneficial, eating garden pests like aphids. However, others can be extremely destructive to your home or business.

Both larvae and adult beetles can damage furniture, carpets, decor, packaged goods, and clothing, as well as leave behind unsightly clues of their infestation.

Because there are so many species of beetle, all with their own reasons for invading your home, you need specialist knowledge to eradicate them and keep them from returning. To truly stop an active beetle infestation, you need a professional pest control service.

How can I prevent beetles invading

As with the signs of infestation, most preventive measures for assuring protection from beetles depend on the species. For beetles that feed on wood, such as wood-boring beetles and powderpost beetles, perhaps the most effective prevention comes from using products like varnish in finished wood products. Varnishing seals old holes and prevents new eggs from being laid or hatched. In order to treat trees, early detection remains crucial. For beetles feeding on interiors, such as carpet beetles, prevention may prove difficult, as the insect finds food in obscure places quite easily. Proper sanitation and exclusion may prove to be the most beneficial way to eliminate carpet beetles. Before purchasing foodstuffs, inspect packaging carefully for beetles that feed on crops and grains. Store dry goods in sturdy, airtight containers and keep areas where food is stored clean. Remove older products and goods as necessary. Appropriately labelled products can be used to control and manage infestations. Calling a trained and qualified pest professional is the best to completely eradicate any active beetle infestation.

Beetles have thick, tough forewings that cover their soft, light underwings, which in some species is used for flight. Many beetles fly by raising these coverings and fluttering the wings underneath. However, in some beetles the soft wings are reduced or the forewings are too heavy to create lift.

To prevent flying beetles from getting into homes, make sure doors and windows stay closed. Patch all tears and holes in screens that beetles can fly through to gain entrance.

Orkin Canada has control methods to deal with flying beetles. Contact these trained pest specialists to help with infestations.