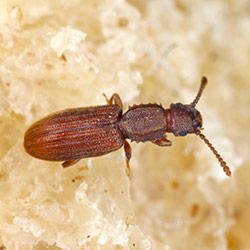 How to identify Grain Beetles

Most grain beetles measure between 2 and 3 mm in length and appear either brown or dark red in colour. Typically, the insects look slightly flattened in appearance. Some of the more common grain beetle species in Canada are clearly identifiable from the six projections on the thorax that look similar to saw blades. Certain types of grain beetles also possess large and prominent eyes, which make the shape of the head noticeably pointier in comparison to other species.

As grain beetle eggs and larvae are small and difficult to spot, visible signs of infestation may be difficult to detect. Nevertheless, one way to recognize the presence of grain beetles is to check the temperature of the potentially infested product. When an infestation proves severe enough, the affected grain tends to overheat. The sight of adult grain beetles crawling on surfaces near stored products also indicates a possible infestation. In improperly sealed and stored foods, visible entry and exit holes may become visible.

Discard infested food items, though exposing the infestation to extreme heat or extreme cold may also be effective before the problem becomes too severe. The use of store-bought traps, in addition to continued vacuuming and other sanitation steps, may work for smaller infestations. Insecticide products, however, should not be used around food products, but spraying in cracks and crevices where the insects live may help eliminate the pests. For extreme infestations, it may become necessary to contact a trained pest control specialist in order to completely eradicate the invading insects.

How to prevent Grain Beetles invading

The easiest way to prevent grain beetle infestations is to keep food storage areas clean and properly sanitized. Purchase dried foods, grains, cereals, and spices in small quantities that will be used in a relatively short period of time. Rotate stock by using older products before opening new packages. When possible, store all foods in refrigerators or freezers in tightly closed containers made of glass, metal, or heavy plastic. Thoroughly clean the crevices and corners of food storage areas, utilizing a vacuum cleaner where possible, and wipe up food spills promptly.

Found throughout Canada, grain beetles are commonly encountered in a variety of manmade structures, such as grain elevators, warehouses, mills, home pantries, and railroad cars and cargo ships which transport food items. With their flattened bodies, most adult grain beetles can easily penetrate and hide in cracks and crevices. Some species are more tolerant of colder temperatures, which allows certain types of grain beetles to live farther north than other beetle species.

Grain beetles, as the name suggests, primarily feed on grains. While different types of grain beetles may favour certain grains and stored foods, the list of preferred grains is largely similar across species. For instance, the sawtoothed grain beetle primarily feeds on oats, wheat, barley, and animal feed, along with an array of processed and packaged foods found in the home. Other species, such as the merchant grain beetle, prefer foods with higher oil content, such as oatmeal, bran, and brown rice, in addition to processed cereals, seeds, and dried fruit.

The life cycle of the grain beetles consists of the egg, larval, pupal, and adult stages. All species of grain beetles lay eggs individually or in batches deposited in or around a ready food supply. The eggs are difficult to see with the naked eye. Depending on the species, a female grain beetle may lay between 40 and 300 eggs each year. Larvae typically emerge in 3 to 10 days, depending on heat and humidity, and reach full adulthood within two months. Adult grain beetles may only live for 6 to 10 months, though the insects have been known to live up to three years in ideal conditions.

Why do I have grain beetles?

These pests are attracted to nearly any stored food product, particularly cereals, breakfast foods, flour, dried fruits and meats, pet foods, and many other items.

The different species prefer different types of grain. For example, the sawtoothed grain beetle feeds on oats, wheat, barley, animal feed, and processed and packaged foods. Other species, like the merchant grain beetle, like foods with higher oil content, such as oatmeal, bran, and brown rice, processed cereals, seeds, and dried fruit.

Grain beetles also like to lay their eggs in or near the grain, so their larvae have an immediate food source when they hatch 10 days later.

How worried should I be about grain beetles?

A grain beetle infestation makes pantry products unfit for consumption, while the sight of these beetles themselves can alarm people. An infested grain will often overheat. Meanwhile, the grain container will be filled with entry and exit holes.

These pests may also indicate the existence of an infestation problem where the product was manufactured or bought, causing granaries, warehouses, mills, and even retail establishments to lose business and profits over time.

Exposing the infestation to extreme heat or cold, using store-bought traps may be enough to stop a smaller infestation, as could the use of pesticides in cracks and crevices where these beetles are hiding – although not around any food products.

However, grain beetles can lay up to 300 eggs every year, with larvae then taking two months to develop into adults. Both the eggs and larvae are extremely difficult to see with the naked eye. To be sure your grain beetle infestation is over, a professional pest control service is crucial.

Other pests related to Grain Beetles