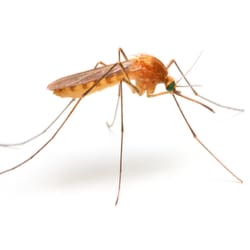 Adult mosquitoes like other insects have three body parts: head, thorax, and abdomen. Three pairs of long legs, a pair of membranous, scaled wings, and halteres are attached to the thorax. The shape, pattern, and colour of the wing scales vary depending on species; in some species, the wings are brilliantly coloured and patterned. The body is typically slender with long legs, ranging in size from 4 to 10 mm in length. The head has a beak used for feeding, which in females is modified into a needle-like structure called a stylet used to pierce and suck blood from hosts. Male mosquitoes have long, feathery antennae, while female antennae are slightly hairy.

What are the signs of the Mosquitoes

The most common signs of mosquito infestation is the buzzing sound the female mosquito makes in flight, followed by bites, and also by seeing adults resting on walls, vegetation, or similar resting sites during daytime. Another common sign is the presence of the larvae – wrigglers in stagnant water, which often seem attached to vegetation or objects in the water. When disturbed, they dive under the water. Together with the wrigglers are the “comma-shaped pupae,” the tumblers. The presence of these immature stages show active breeding.

Learn more about the common signs of an infestation you need to be on the lookout for.

How to prevent Mosquitoes

Learn more about the ways you can prevent a mosquito invasion

Where do Mosquitoes live

Mosquitoes typically breed in still water, as running water such as streams wash out eggs, larvae, and pupae. Examples of ideal habitats include storm sewers, flooded areas, tree holes, old tires, bird baths, flower pots, and anywhere water may accumulate for more than three days. Adults rest in tall, shady vegetation near a water source or in other protective resting areas whenever not in search of hosts to feed on. Mosquitoes tend to be more active under sufficient cloud cover or in shady areas compared to locations in direct sunlight.

What do Mosquitoes eat?

Both sexes of all mosquito species feed on sugar sources, which include plant nectar, honeydew, fruit juice, and other plant secretions. However, the females also need blood for egg production; therefore, it is only the females that bite and feed on blood. Mosquitoes are less specific in their host preference. Host preference depends on the mosquito species, availability of host, and the environment; it ranges from mammals and birds to reptiles and amphibians. Most species in the arctic feed on warm-blooded animals. Larvae feed on various dead and living micro-organisms in the aquatic environments they live in, including algae, bacteria, fungi, and even flotsam.

How long do Mosquitoes live?

Mosquitoes undergo complete metamorphosis with four distinct stages: eggs, larvae, pupae, and adults. The larva is the second developmental stage. Mosquitoes lay eggs either singly or in multiples, called egg rafts, either directly in the water or near a source of water. Eggs hatch in one of two cycles: direct-hatching or delayed-hatching. Direct-hatching eggs are laid directly on top of shallow standing water, and the eggs hatch in a matter of two to three days. Delayed-hatching eggs are laid on moist substrates, and they go through a necessary dry period of several days or weeks and then hatch once submerged by water.

Eggs are laid either singly or in clusters on the surface of stagnant water. The eggs hatch into tiny worm-like larvae also known as wrigglers, because they move by wriggling in the water. The larvae go through four instars before becoming pupae, and this stage lasts on average for seven days. Mosquito larvae can grow up to 15 mm long and feed on a diet of algae and other organic matter in the water. Unlike adult mosquitoes, larvae are exclusively aquatic and have the ability to live in any space capable of retaining water for several days. In addition to ponds and flooded areas, rain barrels and bird baths make ideal habitats for mosquito larvae.

Should I be worried about mosquitoes?

More than just a mere nuisance, mosquito bites can cause very painful inflammation and some can transmit plasmodium, a pathogen that causes malaria, West Nile virus, encephalitis viruses complex, and filarial heartworm in dogs.

Learn more about the potential diseases that mosquitoes can carry

Mosquitoes only live for a short time, but they reproduce extremely fast. Every few days, females lay hundreds of eggs, which hatch a short time later. To successfully break the mosquito life cycle and end the infestation, you need professional pest control services.

Other pests related to Mosquitoes