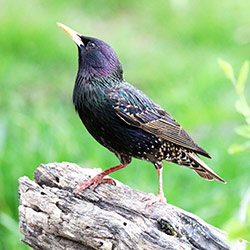 Starlings have a native range throughout Europe, the northern coast of Africa, and as far east as India and Mongolia. They migrate towards the equator and can be found along the coast of the Mediterranean and the Middle East during the winter months of the Northern Hemisphere. In the summer months, starlings will migrate towards Finland, Russia, and Kazakhstan. Starlings in North America breed throughout the continental United States, the southern regions of all Canadian provinces, and along the Pacific coast of British Columbia. During the summer, they will migrate as far north as the territories.

Starlings form communal roosts which can be home to 10,000 or more birds. As they migrate during the winter, flock populations can grow into the hundreds of thousands in southern Ontario and other provinces.

Their preferred nesting sites are tall trees or buildings with cavities where they can readily build nests using dead grasses and fresh vegetation rich in chemicals that act as fumigants. Starlings will maintain the insulating properties of the nest until their chicks are feathered, at which point the nests begin to resemble pest-ridden compost. Females will lay as many as seven eggs in one brood. The eggs hatch after less than two weeks of incubation and young starlings leave the nest within three weeks of birth.

Why do I have European starlings

The European starling, also known as the common starling, likes to nest on tall trees or buildings with cavities. They then build nests with dead grasses and fresh vegetation.

Starlings love to eat wild and cultivated fruits such as berries and cherries, as well as large quantities of feed from livestock farms.

How worried should I be about European starlings

European starlings are noisy birds that do serious harm to humans, pets, and livestock. These pest birds can transmit parasites, like mites, fleas, and bedbugs, as well as potentially fatal diseases, including histoplasmosis, salmonellosis, toxoplasmosis, and chlamydiosis.

The combined weight of a flock of starlings – up to 20,000 birds in the winter – can break small branches and disfigure trees. Their droppings are phytotoxic and can kill mature trees, as well as contaminate livestock feed.

Removing these birds can be a difficult and delicate matter due to regulatory restrictions. To make sure you are complying with the Migratory Birds Convention Act and the Fish & Wildlife Act, you should use a professional, licensed pest control service.

How can I prevent European starlings invading

Eliminate food sources, including bird feeders for other species, Repair and seal any exterior cavities where birds can nest, Cover vents and other openings with wire mesh

Other pests related to Starlings