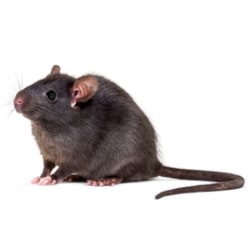 How to identify Roof rats

Black rats are a rodent which was most likely introduced to North America by early European settlers and explorers in the middle of the 16th century. They are also known as “roof rat”, “ship rat”, “house rat”, “Alexandrine rat”, and “old English rat”. Regardless of the name, they have smooth black or brown fur, and are about 40 centimetres long, and have earned some notoriety as carriers of serious diseases.

How to prevent Roof rats from invading

Black rats are common to coastal communities and seaports in Canada. Unlike the house mouse, they exhibit neophobic behaviour, which means they avoid unfamiliar objects and situations. They have an excellent sense of hearing, smell, touch, and taste, but poor eyesight. Black rats are excellent at running and climbing, and prefer to make their in higher locations such as trees and the upper parts of structures. However, they will also burrow in dense vegetation.

Black rats will travel long distances from its harbourage, as much as 90 metres, to find food and water. They are omnivorous creatures but prefer fruits, vegetables, nuts and cereals. They pose a threat to natural habitats because they feed on many of the native birds and insects. Black rats are also a threat to farmers because they devour a variety of crops; cereals, sugar cane, coconuts, cocoa, oranges, and coffee beans. If that wasn’t enough, they will also feed on any meal provided for cows, swine, chickens, cats, and dogs.

Although their litters are small, these pests are prolific breeders, females can give birth to as many as 40 offspring each year.

How worried should I be about roof rats?

Roof rats threaten natural habitats, because they feed on many of native birds and insects. They also devour a variety of crops, including cereals, sugar cane, coconuts, cocoa, oranges, and coffee beans, and any feed intended for cows, swine, chickens, cats, and dogs.

Like all rats, roof rats can transmit many diseases, as well as contaminating food with their faeces, saliva, and urine. They can also carry dangerous parasites like mites and ticks. They can also do structural damage to the upper levels of your home or business.

However, roof rats avoid unfamiliar objects and situations, so can be difficult to lure with baits and traps. While they may have poor eyesight, they have an excellent sense of hearing, smell, touch, and taste, and are fantastic at running and climbing.

Female roof rats can give birth to as many as 40 new offspring every year, meaning an infestation can rapidly grow out of control if not checked. To effectively deal with a roof rat infestation, professional pest control services are crucial.

Other pests related to Roof rats