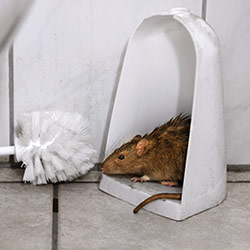 Why do I have Norway rats

Norway rats live on every continent except Antarctica. They like to stay in damp environments at ground level or in burrows, but enter homes looking for warmth, food, and water.

These pests squeeze through gaps in walls and foundations, plumbing, attics, and sidings to nest in crawl spaces, basements, or around the perimeter of homes. They are also strong swimmers, and can enter through toilets and drain pipes too.

Rats will generally eat anything and are attracted to any food easily available. Norway rats tend to prefer foods high in fat content, like grease and meat.

Brown rats typically burrow underground, near another structure which can provide overhead shelter. Like most rats, they are nocturnal and will remain hidden during the day if at all possible. If you see one during the daytime it may be a sign of a large infestation.

The brown rat is a true omnivore and will consume almost anything, but cereals form a substantial part of its diet.

How worried should I be about Norway rats

Norway rats can transmit many diseases, like the bubonic plague, typhus, Weil’s disease, toxoplasmosis, and trichinosis, as well as contaminating food with their faeces, saliva, and urine and the parasites like mites and ticks that they carry with them.

As a business owner, rats can ruin your reputation, eliciting reactions of horror and disgust from customers, causing structural damage to your property, putting your employees at risk, and harming your ability to operate legally.

Norway rats can breed quickly, giving birth to litters of up to 12 offspring up to six times a year – so even with traps in place, an infestation can spiral out of control easily. To truly deal with a Norway rat infestation, professional pest control services are crucial.

How can I prevent Norway rats invading

What is the difference between a Norway Rat vs Roof Rat

Canadian homeowners who have problems with rats are likely dealing with one of two species, the Norway rat or the roof rat, also known as the black rat. These pests create similar damage, making identification hard for residents. Being able to spot a few key differences between the two species can aid in control and removal.

Norway rats are also called brown rats, and some people refer to roof rats as black rats. Despite these common names, colour is not a good way to identify a rodent. The fur of both species can vary from gray or brown to black.

Instead, consider the builds of Norway rats vs. roof rats. Norway rats are bigger and stockier, while roof rats are slender and athletic. The Norway variety is also larger in general, though they have smaller ears and eyes. In addition, the tail of a Norway rat is shorter than its body. Roof rats have tails longer than their bodies.

Roof rats are natural climbers, which means they usually enter attics and the upper levels of houses. On the other hand, the Norway rat prefers to stay low to the ground, appearing in basements and garages.

Even though the pests have the similar diet, Norway rat vs. roof rat feces look different. Norway rat scats are bigger and have an oval shape and blunt ends, while roof rat poop is smaller and pointed at the ends. Because these pests leave behind trails of waste wherever they go, droppings are often the first sign of rodents.

Other pests related to Norway rats