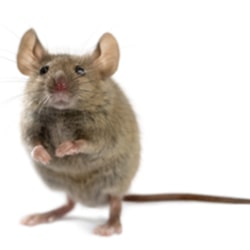 House mice often appear brown or grey, with lighter colouring on the underside of the body. Deer mice also possess brown or grey coats, but with white bellies and tail bottoms. Both species feature oversized ears relative to body size, which typically runs between 150mm and 170mm in length. Much of the body length comes from the characteristic tail each mouse possesses. The tail of the house mouse usually doubles the length of the body, while the tail of the deer mouse represents less than half of the overall body length. Deer mice also display white colouration in the feet, which differs from the pinkish-buff colours that appear on the feet of house mice.

Mice prefer environments that allow for total concealment. Outdoors, the rodents typically hide in underbrush or other dense vegetation, such as tall grasses, shrubs, and vines. Most notably, mice tend to live in close proximity to humans and often find refuge in buildings, including homes, businesses, industrial factories and warehouses, and other structures like dog houses, sheds, barns, or lawn ornamentations. Pastures, grassy fields, and farmland represent typical habitats of mice in the wild, while mice in populated areas tend to live near readily available food sources away from the threats of predators.

Like humans, mice are omnivorous and feed on a variety of food materials such as insects, fruits, nuts, seeds, and food prepared or discarded by humans. The mammals also notoriously chew or bite through inorganic and typically indigestible materials, such as books, plastics, drywall, and even aluminum cans. Each mouse feeds multiple times a day, with some mice partaking in upwards of 20 or 30 meals over a 24-hour period.

As mammals, mice give birth to live young after completing a period of gestation, which typically lasts around 20 days. Mice produce offspring in litters of five to six babies. A typical deer mouse or house mouse may produce up to a dozen litters per year. Newborns reach sexual maturity after about a month for females and two months for males. The mating season often lasts from early summer to late fall; however, indoors, mice may breed year-round. The mammals generally live no more than a year.

Why do I have mice

The two most common species of mice in Canada are deer mice and house mice. When they invade your home they are seeking food, water, and warmth, often due to falling temperatures as winter approaches.

In the wild, some mice like to burrow underground, while others live in nests on the surface. House mice prefer forested areas, pastures, grassy fields, and farmland, hiding in underbrush or other dense vegetation, such as tall grasses, shrubs, and vines.

However, in populated areas, mice like to live near humans. This gives them reliable food and water, warm shelter, and protection from predators. They often invade homes and businesses to build their nests in dark secluded places like wall voids, attics, pantries, and garages.

Once inside, the mice like to raid any food stores available.

Deer mice prefer small insects like beetles, earthworms, snails, seeds, fruit, and fungi. They are attracted to homes with plenty of insects or accessible pantry foods.

How worried should I be about mice

Mouse feces and urine, as well as the tracks of detritus the rodents regularly leave behind, contaminate surfaces in living areas.

Deer mice can carry and transmit Hantavirus, a rare respiratory disease, in their saliva, urine, and faeces. This disease can be fatal in humans and there is no known cure. Even small particles of deer mouse waste in the air can spread the disease.

In general, mice contaminate about 10 times as much food as they actually eat. In doing so, house mice can transmit diseases such as salmonellosis, which causes diarrhea, fever, and vomiting, and parasites like fleas and mites, which can cause dermatitis.

Mice can also chew or bite through inorganic and normally indigestible materials, such as books, plastics, aluminum cans, drywall, insulation, siding, and wallboards, causing damage to products, property, and the building’s structural integrity.

Deer mice store food in holes near their nests and can create food caches in basements, attics, and crawl spaces. As the mice multiply and increase activity, small openings in nearby walls may be progressively widened.

A mouse infestation can destroy businesses like restaurants, property management, and hotels, ruining their reputations, contaminating and damaging their food and facilities, and affecting their ability to operate, all with potentially major financial consequences.

But eradicating a mouse infestation alone can be challenging due to the sheer rate at which these pests breed. House mice can give birth to litters of six young mice up to 12 times every year. Deer mice can have litters of up to 12 young mice four times a year.

Newborns reach sexual maturity after a month or two. In the wild, the mating season is from early summer to fall, but indoors, mice breed all year round, meaning that a mouse infestation can quickly get completely out of control if left unchecked.

Working alone with snap or glue traps, you may be able to catch and remove a few of the pests, but to stop mice from returning, you need a sanitation program, strategic landscaping, possibly even structural changes, and professional pest control services.

How can I prevent mice invading

Mice do not hibernate in winter, but rather retreat to nests to avoid low temperatures. Houses are the perfect shelter from the cold, as they offer plenty of hidden areas, heat, and food. Vents and other openings into basements and attics give the pests easy access to nesting spots.

Deer mice have brown or grey fur with a white underbelly and feet. A deer mouse’s tail is about the same length as its small body, and its hind legs are longer than those in the front. These pests have larger eyes and ears than house mice, which is a good way to tell the two rodents apart.

Most house mice are grey in colour, but some have brown shading around their backs or undersides. They are about 8 cm in length with long, semi-naked tails and short hind feet.

Other pests related to Mice