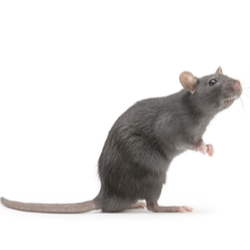 The two rat species have different and distinct features. The roof rat is most recognizable because of its long tail which drags behind it as it moves. The tail is often longer than the rest of the body. The body measures about 41 cm in length, is slick and lean with brown to black fur, and weighs between 150 and 250 g. The ears and eyes are large with pointed snout. The Norway rat on the other hand is stocky, heavy body, short tail with the body measuring about 30 to 50 cm. Its eyes and ears are small with blunt snout. The body has brown or black colouring, though some species may appear gray or white, as well.

Rats are present in Europe, Asia, Africa, Australia, and the Americas. The widespread population shows no signs of decreasing. In fact, brown and black rats are both considered abundant and of least concern of endangerment or extinction. The highly adaptable animals thrive in areas where humans live and feed on any obtainable food sources, which greatly diversifies the available habitats for rats.

What do Rats eat?

While specific eating habits may differ slightly between particular rat species, the rodents generally eat anything. As omnivores, rats adhere to a mixed diet consisting of grains, fruits, nuts, vegetables, and meat. However, the Norway rat has been shown to prefer foods high in fat content such as grease and meat. Meanwhile, roof rats prefer grains, nuts, seeds, and plant-based foods.

How long do Rats live?

Rats usually only live to about six months of age in the wild. They reach sexual maturity at around two to three months old. Pregnancies last between 20 and 30 days and typically result in 6 to 12 offspring. Though the rodents possess short lifespans, the rapid rate at which they reproduce, coupled with short gestation periods and large litter sizes, allows rats to continue as formidable pests.

Why do I have rats

Rats are one of the most adaptable creatures on the planet and have spread around the world. The most common rat species in Canada are the Norway rat, also known as brown rats, and the roof rat, also called black rats.

Norway rats like to stay at ground level or in burrows, in crawl spaces, basements, or around the perimeter of the house. Roof rats like to nest in trees, attics, and rafters.

Both usually access homes by squeezing through unsealed openings, but they are strong swimmers, and can enter through toilets and drain pipes too.

Rats will generally eat anything and are attracted to any food easily available. Norway rats tend to prefer foods high in fat content, like grease and meat. Meanwhile, roof rats prefer grains, nuts, seeds, and plant-based foods, possibly because the packaging can be used for nesting.

Should I be worried about rats?

Back in the 14th century, rats infamously spread the Black Death plague, which led to the deaths of millions of people. The pests do not carry the plague today, but can still transmit many other diseases, like rat-bite fever, salmonellosis, leptospirosis, and E. coli infection

These diseases can be spread directly through bites, body fluids and droppings, or indirectly by the parasitic insects, ticks and mites that feed on them or nest in their fur.

These pests also do structural damage which can be expensive to fix. Outdoors, Norway rats can leave unsightly holes in lawns and even undermine building foundations. Indoors, both species can tear up insulation, paper, and cloth to make their nests.

Rats can be heard constantly gnawing, even from behind the wall, and will leave teeth and rub marks around the home or business. Their remains and detritus can also clog up drain pipes and roof rats’ nests often block gutters.

As a business owner, rats can ruin your reputation, eliciting reactions of horror and disgust from customers, causing structural damage to your property, putting your employees at risk, and harming your ability to operate legally.

However, an infestation can grow rapidly, as rats can reproduce exponentially, giving birth to litters of up to 12 new offspring every month. To effectively deal with a rat infestation and install the traps and sanitation program needed, professional pest control services are essential.

How to prevent Rats?

Other pests related to Rats