While most people don’t consider birds a pest, they are capable of spreading disease and their droppings can be more than just an eyesore – in fact, bird droppings can cause structural damage to your building. The four most common species of problem birds are: pigeons, starlings, house sparrow and Canadian geese. 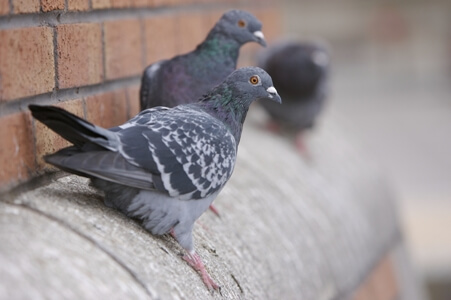 Pigeons are a common sight in urban environments. Often referred to as “rats with wings,” pigeons can carry a number of diseases. Some are serious enough to cause fatalities if left untreated. They often perch on the edges of balconies and ledges around buildings. You may not always see them, but you and any visitors will certainly notice their unsightly droppings.

Starlings are an invasive species and one of the most common birds in North America, with a population exceeding 200 million. While small in stature, they travel in flocks of up to 20,000 and the combined weight of these birds can break branches and disfigure trees. Their droppings are phytotoxic, which in large quantities, can kill mature trees.

House sparrows have adapted particularly well to the urban and suburban environments created by humans. This provides them with some security from natural predators. They are surprisingly aggressive and have been known to oust native species from their nests. They can also transmit diseases which can affect humans, cats, dogs and livestock.

Canadian geese are extremely successful at living in human-altered areas and have proven able to establish breeding colonies in urban and cultivated areas, including parks. This has led them to be considered a pest species because of their destruction of crops, and issues with their noise, droppings, aggressive territorial behavior, and habit of begging for food.

There are numerous other specifies of birds in Canada, many of which are protected by national or local regulations. If you’re experiencing issues with pest birds or have any questions regarding bird control methods, contact your local Orkin Canada branch.

Understanding The Impact Of Pest Birds On Your Business

Pest birds invading your commercial property are not only a nuisance, but can also put your business/commercial property, customers and employees at risk. Whether it is potential health risks and hazards that can be associated with bird droppings or liability risks that can lead to legal actions, pest birds can be nothing but trouble. Here are some of the issues that pest birds can bring to your business.

Birds: Don’t Egg Them On

Birds may make nice additions to some landscapes, but when it comes to your property, these feathery fiends are a no-go. Not only can birds create extra noise, but they are also very unsanitary and can be a nuisance to anyone who walks by.