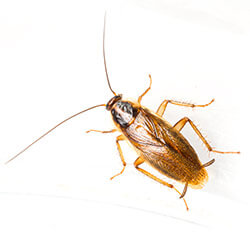 Cockroaches tend to prefer areas that are warm and humid. Like most indoor pests, they are looking for sources of food and water as well as a safe place to rest and reproduce. Cockroaches will typically be found in and around appliances, bathrooms, under sinks, dishwashers, medicine cabinets, mop closets, false ceilings, and anywhere food may be kept overnight such as storage closets and pantries. Cockroaches are not likely to move from one building to another, but that hasn’t stopped them from spreading via shipments and packaging to nearly every corner of the world, even as far north as Alert, Nunavut.

Cockroaches are omnivorous and scavengers, as such they will feed on almost anything available. However, they do prefer sugary foods, grease, starch, and meats. In heavily infested buildings, they may resort to other eating glue, packaging materials, biting humans, and even turning cannibalistic.

German cockroaches undergo a simple metamorphosis composed of three stages, egg, nymph, and adult, which are completed in a relatively short amount of time. In fact, German cockroaches reach adulthood faster than any other cockroach species in Canada. The fast development of German cockroaches enables them to populate indoor areas quickly, resulting in infestations which become difficult to control. Beginning with the production of eggs and ending with the emergence of fully developed adults, the German cockroach life cycle takes as little as 10 weeks to complete.

Like many other insects, German cockroaches hatch from eggs. Adult females produce and store up to 48 eggs at a time in distinctive capsules called oothecae. Leathery to the touch and shaped like a bean, the ootheca protects the unhatched eggs from the elements, predators, and other potential threats. Female German cockroaches attach the protective capsule to their abdomen and carry it around until the eggs are close to hatching. About a day before the eggs hatch, the female locates a suitably hidden site and deposits the ootheca, gluing it to the surface. A day or so after depositing, the nymphs emerge from the ootheca by splitting it open. The development time from eggs to adult depends upon the temperature of the environment but can take, on average, about four weeks.

Initially white in colour, newly hatched German cockroach nymphs turn dark brown a few hours after hatching. The nymphs are miniature versions of the adults except they are smaller and don’t have wings. The nymphs develop by molting five to six times before becoming adults. The period between each molt is called an instar. After the final molt, the nymph emerges as a fully developed adult.

Why do I have German cockroaches?

German cockroaches are the most common cockroaches in Canada and like warm, humid environments with easy access to food, water, shelter, and a safe place to reproduce.

They typically invade areas in and around appliances, bathrooms, under sinks, dishwashers, medicine cabinets, mop closets, false ceilings, and anywhere food may be kept overnight, like storage closets and pantries.

They don’t usually move from one building to another, but can be brought in within shipments and packaging.

Like other cockroaches, they will eat practically anything, but do prefer sugary foods, grease, starch, and meats. In heavily infested buildings, they may resort to eating glue, packaging materials, and even fellow cockroaches.

How worried should I be about German cockroaches?

German cockroaches can make food inedible with their feces and defensive secretions. They carry pathogenic organisms on the feet and legs and transmit intestinal diseases, like diarrhoea, dysentery, typhoid fever, and cholera.

People who suffer frequent and prolonged exposure to cockroaches can develop mild to severe allergic reactions, including dermatitis, itching, swelling of the eyelids, and serious respiratory conditions. In heavy infestations, German cockroaches can even bite humans.

However, German cockroaches reach adulthood faster than any other cockroach species in Canada, taking only 10 weeks to develop from eggs into fully grown adults. They can live for up to seven months, and females can produce up to 350 eggs in her lifetime.

This means a single female German cockroach can spawn tens of thousands of descendants in just one year. They populate homes quickly and infestations can swiftly become hard to control. To truly eradicate German cockroaches, you need a professional pest control service.

How can I prevent German cockroaches invading?

Vacuum all cracks and crevices, Clean up crumbs and spills promptly, Do not leave food or water out overnight, Sweep or vacuum up food and debris on floors, Clean counters, sinks, and tables with soapy water, Take out trash in closed plastic containers, Keep waste containers washed and clean, Wash dirty dishes and utensils immediately, Fix leaky faucets and water pipes, Increase ventilation to prevent condensation

German cockroaches (Blatella germanica) are the most common species of cockroach in Canada. While they have been known to bite humans, such bites are very rare and mostly occur while humans are asleep. Cockroaches are nocturnal insects with an omnivorous diet. They may feed off of food particles left on human faces and skin. Babies and children who have more sensitive skin may attract the insect with the smell of spilled milk around the mouth. There is no scientific evidence that cockroaches transmit pathogens through bites.

German cockroach bite marks typically appear as small, red spots and may eventually form a scab. Cockroach bites are not always easy to identify. Due to their feeding behaviour, German cockroaches remain indiscriminate by nature and may find food in a variety of areas in your home. Everything from small crumbs to dead skin may entice them to feed near or on a human. As cockroaches remain vectors of disease, the bites may cause secondary infections. In order to dissuade German cockroaches, good housekeeping and sanitation is necessary. Clean up after every meal and do not take food to bed or have bedding close to food sources. Clean up clutter and other potential harbourage areas for cockroaches and close potential areas of entry such as voids and cracks/crevices in walls. Above all, contact a licensed pest control professional for effective control and elimination of a German cockroach infestation.

Other pests related to German Cockroaches