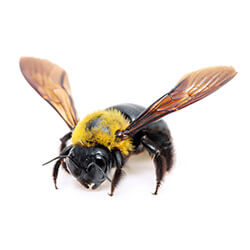 How to identify Carpenter Bees

Male eastern carpenter bees often hover around the openings to nests. Although the insects may appear aggressive to humans, the bees usually guard against other insects and care little about people. Still, spotting the large bees lingering around wood structures is an indication of carpenter bee activity or infestation. Additionally, homeowners may notice accumulations of pulverized wood on the ground below nest entrances.

How to prevent Carpenter Bees from invading

As with most bee species, eastern carpenter bees are ecologically important. While pest control specialists may be called in to handle infestations with pesticides, killing the bees is strongly discouraged. Instead, homeowners should consider painting or varnishing external wood to deter carpenter bees, as the insects prefer untreated wood surfaces. Another useful strategy for managing eastern carpenter bees involves purposely placing slabs of wood, which are ideal for burrowing, away from the home to give the insects a more suitable nesting option than household structures.

Eastern carpenter bees create nests by burrowing into wooden doors, windowsills, roof eaves, shingles, railings, telephone poles, wooden lawn furniture, decks, bridges, or any wood greater than 50 mm thick provides suitable space for the bee. Eastern carpenter bees demonstrate a preference for coniferous wood and are primarily associated with forests in the United States and Canada. The bees also prefer surfaces without paint or varnish. Excavated galleries are an average of 10 to 15 cm long but may extend up to three metres in length with repeated use and when several females are nesting at the same time.

Adult males and females overwinter in wood tunnels and emerge in the spring to mate. After creating new space for eggs in existing burrows, females stock the chambers with bee bread, deposit an egg, and seal off each chamber. Typically, eastern carpenter bees produce six to eight eggs at a time. The insect spends an average of 2 days as an egg, 15 days as a larva, 4 days in a prepupal stage, and 15 days as a pupa. Adults emerge in August, feed, and then return to the same tunnel to overwinter and begin the process over. Overall, the bees may live as long as three years.

Why do I have carpenter bees?

Instead of establishing colonies with other members of the same species, carpenter bees construct individual nests in wood structures. They build nests in trees as well as man made items crafted of wood. Carpenter bees prefer to nest in softwoods, such as cedar, cypress, fir, pine, coast redwood, and spruce, and prefer to attack exposed, weathered and unpainted wood. The pests tunnel into wooden structures such as decks and porches, doors, fence posts, roof eaves and shingles, lawn furniture, railings, telephone poles, and windowsills.

How worried should I be about carpenter bees?

The manner in which carpenter bees construct their nests can cause minor to severe property damage. When a single carpenter bee bores into a wood structure to build a nest, the damage is typically minor and limited to the cosmetic damage created by the presence of the entrance holes. However, when left untreated, future generations of carpenter bees often reuse the same nests by simply expanding the network of tunnels and constructing new cells for eggs. Over time, the continued expansion of the nest may cause severe structural damage. In addition to damaging property, carpenter bees annoy and alarm homeowners. Male bees often defend the nest by flying aggressively at intruders. Females can sting, though they rarely do.

Other pests related to Carpenter Bees