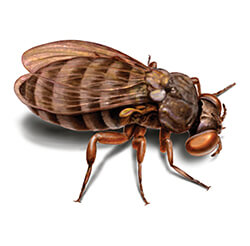 How to identify Bees

Most bees are social insects, though some are solitary. The honey bee is considered a true social (eusocial) insect. It primarily lives in nests that are sometimes called hives and have a caste system made with queens, reproductive males, and workers of both sexes. While most species of bees are not naturally aggressive, they do possess barbed stingers, which they use to defend the colony or ward off attacks. When a bee stings, the stinger detaches from the bee, rupturing the abdomen and causing it to die.

Despite bearing a strong resemblance to wasps, bees typically have broader, hairier bodies and legs than wasps.

Types of Bees in Canada

Bees in Canada primarily belong to the families Megachilidae, Halictidae, Andrenidae, and Apidae. Leaf cutter bees from the Megachilidae family tend to nest in the ground or in holes in stems and use cuts from leaves to modify nesting chambers. Miner bees, which make up part of the Andrenidae family, are also ground-nesting insects. Sweat bees of the Halictidae family can be either solitary or social and are typically shiny and metallic in colour. The family Apidae consists of some of the most recognizable bee species, including honey bees, bumblebees, and carpenter bees.

Perhaps the most obvious sign of a bee infestation is seeing or hearing the insects around the home or yard.

The presence of nests and hives also tends to signal the existence of bee infestations. For certain species, such as leaf cutting or miner bees, look for semicircular holes of up to 19 mm cut out of leafy vegetation such as rose, ash, and lilac plants. In cases of ground-nesting bee infestations, homeowners may notice small areas of dirt or soil excavated around the nest entrance, as well as bees flying low to the ground.

Carpenter bee infestations are highly visible, as the insects create bored holes that measure 12 mm in diameter or larger and may also leave perceptible sawdust behind. Hearing the buzzing insects within the walls of a structure may also indicate the presence of carpenter bees in the home.

Bees are responsible for pollination of plants, producing both honey and beeswax, and are one of nature’s best friends. There are over 700 confirmed species of bees in Canada alone, and though vital in some areas, they are regarded as nuisance pests by many people.

While bees typically display nonaggressive behaviour, large infestations may still lead to attacks and stings on humans and pets alike. For the proper removal and prevention of bee infestations, contacting a trained pest control specialist is typically the most serviceable solution.

How to prevent Bees from invading

Avoiding bees can prevent problems from occurring in the first place. Unlike wasps, most bee species, are not naturally aggressive and become hostile only when provoked or nesting areas become disturbed.

For specific species of bees, different preventative tips may also help. With leaf cutter bees, protecting plants with cheesecloth or some other sort of barrier may shield the vegetation from damage. Along the same lines, painting or staining and weather-treating wood structures often dissuades carpenter bees from attempting to nest, as the insects tend to only attack weathered and untreated wood.

Found throughout the country, bees exhibit unique nesting habits that vary according to species. The miner bee nests directly in the ground either alone or as part of an aggregate colony. These bees line the cell walls of the nest with a secretion and pat it down to make it smooth and stable. Similarly, leaf cutter bees are solitary nesters that typically burrow several centimetres into soft or rotting wood and then utilize cuts of leaves to serve as individual sites for the laying of eggs.

Sweat bees also tend to nest in rotting wood, typically in burrows underground. The members of the Halactidae family live either solitarily or communally and typically form distinct female caste systems, much like honey bees. Bumblebees and carpenter bees also build colonies, which are made up of different cells with an egg laid inside each one. The bumblebee makes nests similar to the hive-like constructions of the honeybee, while carpenter bees nest in soft woods, including manmade structures.

Bees eat pollen and drink nectar collected from a wide variety of flowering plants. A bee uses a proboscis, which functions as a tongue-like appendage, to gather nectar. Long-tongued species, usually from the Apidae and Megachilidae families, collect pollen and nectar from a more diverse assortment of flowers, as the insects can reach farther into flowering plants than short-tongued species.

Most species of bees are known to drink water, as well. Developing ground-nesting bees eat mixtures of pollen and honey left in each individual cell, while honey bee larvae are fed a mixture of pollen and nectar, which forms a protein-rich substance called bee bread or ambrosia. Future queens may instead feed on royal jelly, a substance secreted by other female bees.

The bee starts its transformative life cycle in the egg before hatching into larvae, pupating, and finally emerging as an adult. In social bee species, a single queen maintains the responsibility of laying each egg, while the other sterile females do not reproduce but instead stay with the queen to take care of the young. Newborn females may be raised to become future queens responsible for starting new colonies and continuing to propagate the species.

Certain social species, such as bumblebees and honey bees also build smaller colonies. Each colony begins with a single reproductive female laying eggs and maintaining the nest. When new females are born, a division of labour typically occurs, with the queen only laying eggs and other females tending to them eggs. In most social species of bees, the queen may live for several years, while most workers tend to die after a few weeks or months. Males generally die after mating.

Why do I have bees?

Bees often nest in inconvenient locations and can even cause property damage. Carpenter bees burrow into soft woods and may nest in eaves, window trims, siding, wooden shingles, decking, and even outdoor furniture. In extreme cases where the carpenter bee repeatedly nests in the same area, the structural integrity of the nesting site may be compromised. Similarly, leaf cutter bees cause aesthetic damage to plants when cutting leaves and may also inflict damage on the stalks of plants used for nesting purposes.

How worried should I be about bees?

Bees are beneficial insects due to their role as plant pollinators. However, they do sting and the risk of getting stung is often the main problem caused by bees. Many species are known to sting humans and other animals, though most bees only sting when threatened or defending the nest. Bee stings may be painful or even fatal in extreme cases where the victim has a serious allergic reaction to the bee venom. Bumblebees, unlike other bees in the Apidae family, are capable of stinging multiple times, as the stinger is smoother and does not detach. The bumble bee sting is also one of the most painful.