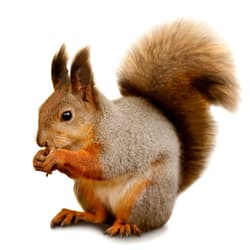 Canada is home to 22 different types of squirrels. Six of these are ground-dwelling, four live in trees, and two are varieties of flying squirrels. Common ground squirrels have thin tails and hibernate through winter, while bushy-tailed tree squirrels are active year-round. Tree squirrels build nests, living atop branches and within tree hollows. Ground squirrels do the opposite, digging burrows to reside underground. All squirrels use their tails for shade during warm weather, warmth at night or in winter, and balance when climbing or jumping.

Several types of tree squirrels can be found throughout Canada. These include eastern grey squirrels, Douglas squirrels, and fox squirrels. As the name implies, grey squirrels are found in the eastern part of the country and are various shades grey or black in colour, tipped with white. Fox squirrels are the most prevalent species nationwide and can be identified by their reddish-brown colouring. Finally, Douglas squirrels live primarily in the western provinces and have black stripes along the sides of their bodies.

Tree squirrel damage is typically caused when the pests enter homes to nest. Entering through attics and chimneys, the pests gnaw on insulation, electrical wiring, and structural supports. They are also known to damage lawns, gardens, and flowerbeds. Additionally, tree squirrels habour parasites that they can spread; some species are known transmit diseases such as plague but this is very rare.

Among the many types of squirrels in Canada, eastern grey squirrels are the most common. In addition to their signature grey colour, these pests may also have brown or black fur. With tails as long as their bodies, grey squirrels measure about 40 to 50 cm long in total. This species can process acorn proteins more efficiently than many types of squirrels. As a result, they often leave their nests to forage even during cold weather when food is scarce, unlike other species. Eastern grey squirrels can be found throughout the entire southern region of Canada, including Quebec, Ontario, and Nova Scotia.

Despite their small size, red squirrels are almost as numerous as greys. They’re found nationwide in places such as Newfoundland, Saskatchewan, and the Yukon. These tree-dwelling pests change their coats with the seasons. When it’s warm, their reddish or grey fur has two black lines on their backs and a white patch on their stomachs. Throughout the cold season, the black lines disappear and their white stomachs turn grey. Red squirrels are about 20 cm in length as adults, with tails extending as far as 10 cm from their bodies. During winter, the pests store large amounts of food in their nests and don’t leave to forage as often as other types of squirrels in Canada.

Tree squirrels found in Canada range in size from 10 to 70 cm long. They have bushy tails, are adept climbers, and may appear rust-coloured, brown, grey, or black. Ground squirrels can be similar in size to tree squirrels or significantly larger. Flying squirrels have distinctive membranous body structures that allow them to glide from tree to tree.

Ground squirrels prefer grassy habitats, such as open fields, pastures, and parks, and typically burrow into the ground to build dens. Conversely, tree squirrels and flying squirrels prefer dense woodlands and make their nests high in the treetops. As human presence provides squirrels with consistent food and shelter, most species also commonly nest in and around residential neighbourhoods.

There are two kinds of squirrel nests found in trees: dreys and dens. Squirrel dreys are built on the outside of trees, usually at the fork of the trunk and a branch about 30 feet off the ground. These nests are made of a ball of loosely woven twigs, leaves, and grasses. Out of the two types, squirrel dreys are most commonly seen by homeowners, as most adult squirrels build more than one.

On the other hand, dens often go unnoticed because they are built inside cavities like hollow trees or abandoned wells. More stable and protected, these nests are used year-round and are squirrels’ primary winter homes.

Unfortunately, these pests don’t always stay outdoors to build their shelters. Finding nests in attics isn’t uncommon. Once inside, squirrels may gnaw on electrical wires or wood and leave droppings all over. They carry parasites such as ticks, fleas and mites. Besides their bites and irritations, some of these parasites vector and can transmit disease causing pathogens. Homeowners usually aren’t aware they have a squirrel nest in the attic until they hear scurrying during the daytime. Sometimes a squirrel may fall and get trapped behind walls, persistently scratching as they try to claw their way out.

Squirrels will also nest in chimneys, which creates fire hazards. Additionally, having the pests in chimneys contributes to the spread of unpleasant smells. If a squirrel falls out of the nest down into the fireplace, it creates havoc with no easy solution.

Just like people, squirrels in winter stay inside and put on plenty of layers to beat the cold temperatures. Squirrel hibernation varies in length depending on climate and species. Some species are only out of commission for a few months, while the Richardson’s ground squirrel, a native of Southern Alberta, Saskatchewan, and Manitoba, may hibernate as long as seven to nine months.

On the other hand, tree and flying squirrels are active year-round. Instead of hibernating, they rely on sheltered dens in trees, fat reserves, and food caches to survive the cold weather. During mild winters when the pests are outside more often, homeowners may notice that squirrels look portlier than their sleek, warm-weather selves. This is because they build up layers of fat to survive foraging trips in cold conditions.

To make finding food easier during winter, squirrels often create food caches. These underground stockpiles of calorie-rich nuts and seeds take different forms depending on species. While a single grey squirrel may create several thousand buried caches each season, red squirrels work together to create one communal hoard. In addition to nuts, the pests forage for insects, bird eggs, mushrooms, and animal bones during cold weather.

Though the different species of squirrels keep slightly varied diets, the pests are mostly herbivorous and feed on seeds, nuts, berries, and acorns. Species of ground squirrels also supplement their diets with farm crops, while tree and flying squirrels have been known to eat a variety of insects, moths, small amphibians, bird eggs, and young hatchlings. Additional food sources include fungus, sap, and tree bark.

Female squirrels typically give birth to litters of one to six young. Squirrels are born hairless and blind and stay with their mothers for up to two months. Maturity is reached around nine months, at which point adolescent squirrels leave their nests to find their own territories. In the wild, squirrels enjoy lifespans anywhere from 5 to 10 years.

Why do I have squirrels

More than 20 species of tree, flying, and ground squirrels can be found throughout Canada.

Ground squirrels prefer grassy habitats, such as open fields, pastures, and parks, and typically burrow into the ground to build dens.

However, realizing they can get a constant supply of food and shelter near humans, most squirrel species also nest and forage in and around residential neighbourhoods.

Since they can scale buildings with ease, squirrels often enter houses, barns, and attics through vents or openings around roofs. Once inside, the pests make their way in between walls to build nests and raise their young.

How worried should I be about squirrels

Ground squirrels are major agricultural pests and devastate crop yields. In gardens, they will leave behind girdled trees and holes around lawns that serve as entrances to burrows.

Tree and flying squirrels regularly enter homes, where they chew on electrical wiring, rip insulation from walls, and keep residents up by being noisy.

When cornered, squirrels can quickly become aggressive, so trying to trap them is extremely dangerous. To safely and humanely have a squirrel removed, you’ll need a professional pest control service.

How can I prevent squirrels invading

Build fences above and below ground, Seal any entry points into homes, Remove all overhanging branches

Squirrels are active during the day except for flying squirrels, which are nocturnal. Hidden in the dark and high up in trees, these gliding squirrels often go unseen by people. Searching for food, such as insects, berries, nuts, and seeds, is the most common activity for squirrels at night. While these pests rarely enter houses, they sometimes use breached attics or empty sheds as shelter from harsh weather and predators. In these instances, homeowners may hear squirrel noises at night, such as high-pitched squeaks, tapping, and scurrying in attics or on rooftops. Some squirrel species are protected by law. Because trapping or removing them may be prohibited, residents should not try to handle or trap squirrels. Contact your local Orkin Canada wildlife specialist to safely remove squirrels you may have heard or seen around your home or business.

When do squirrels have babies

Grey squirrels have two breeding periods per year, one in mid-summer and another in early spring. Young are usually born between March and April, with a second litter arriving around July or August. Females may give birth to one to nine babies at a time, though somewhere in the range of three to five is typical. Each baby squirrel is completely dependent on its mother for the first five to eight weeks of development and stays close to the nest during this time.

New mothers seek protected areas to raise their babies, as the tree nests they use most of the year leave young exposed to predators. It’s during birthing seasons that squirrels often move closer to human homes, sometimes taking up residence behind walls or in attics, sheds, and chimneys.

If homeowners find baby squirrels in the attic, they probably haven’t been abandoned. More likely, the mother is out gathering food. After weaning, young begin venturing out with their mothers to find more natural shelters. This is an important consideration when attempting to block re-entry. If babies are trapped inside, not only will they die, but the mother will furiously try to rescue them and possibly causing structural damage.

Despite their cute, furry appearance, squirrels can actually cause significant structural and garden damage. They frequently venture onto properties in search of fruits and nuts, and it is difficult getting them to leave once they find a good food source. These rodents typically dig holes in yards, eat plants, and keep away desirable wildlife like birds.

Most homeowners do not give much thought to the presence of squirrels in their yards but are quick to react when one is discovered inside the home. These pests often find their way into attics and crawl spaces by squeezing through small holes in walls and siding. Once inside, they build nests and chew through insulation, wood, and electrical wiring. This damage severely degrades the structural integrity of the wood and creates dangerous fire hazards.

Other pests related to Squirrels