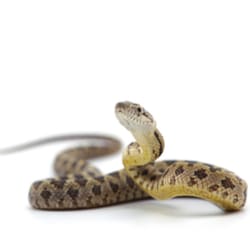 How to identify Snakes

The fact that snakes have no arms or legs gives them a unique appearance. While colouration and markings vary from species to species, all snakes share features such as scaly bodies, lidless eyes, and the ability to dislocate their jaws in order to swallow large prey.

They navigate their environments by constantly flicking out their tongues to taste the air, and some species can even sense the infrared heat of their prey with special sensory organs in their heads.

Snakes go wherever there is food. Places with existing rodent or insect infestations make promising homes. Residents can detect the presence of snakes by keeping an eye open for the reptiles sunning themselves on patios, driveways, or rocks. Finding discarded snake skins around homes or yards is another good way to discover snake infestations. If there is a pond or stream on the property, snakes may be seen swimming in the water or slithering through the grass at the water’s edge.

The best solution to snake problems is to contact a wildlife control agency. The wildlife and pest removal experts at Orkin Canada are trained to identify species of troublesome snakes and then eradicate them. Our removal technicians also help safeguard homes from additional snakes and address the underlying causes bringing them there in the first place.

How to prevent Snakes from invading

To prevent snakes, residents should remove potential burrowing sites and reduce available food sources. Clean up brush piles in the yard, trim overgrown shrubs, and keep lawns mowed to a short height. If there are rodent infestations on the property, homeowners should take steps to eradicate them.

Snakes can be found throughout Canada and are most prevalent in the southern regions of the country where temperatures are more moderate. They live in forests, prairies, deserts, marshes, and near freshwater lakes and ponds. Most snakes live in underground burrows, but certain species live in trees or lead semi-aquatic lives.

Small animals like rodents, fish, frogs, and insects are the preferred prey of most snakes. Many snakes swallow their prey alive, but some species rely on venom to paralyze and kill their food. Others constrict their prey, squeezing the life out of their victims before devouring them whole. The reptiles can unhinge their jaws to swallow their food, which is then digested over a long period of time.

Snakes mate in the springtime when they wake up from hibernation. Many Canadian snakes can give birth to up to 25 offspring. As the pests shed their skin to grow, young snakes go through several moults during their first year of life. Relatively long-lived, snakes may grow to be as old as 50 years in captivity, though they generally live much shorter lives in the wild.

Why do I have snakes?

There are approximately 26 species of snakes in Canada, including garter snakes, water snakes, rat snakes, and milk snakes, living in forests, prairies, deserts, marshes, and near freshwater lakes and ponds.

Most snakes live in underground burrows, but some species live in trees or lead semi-aquatic live. Snakes feed on small animals like rodents, fish, frogs, and insects. Some species eat their prey alive, others paralyze it with venom or strangle it with their bodies first.

However, snakes will go wherever there is food. Places with existing rodent or insect infestations make promising homes.

How worried should I be about snakes?

Snakes are generally beneficial, eating pest insects and rodents, but can attack and bite humans and pets when provoked, which can cause extreme pain and even death.

Venomous snake species found in Canada are the Massasauga, Northern Pacific Rattlesnake, Night snake, and Prairie Rattlesnake. If bitten by any of these, you must seek medical attention.

Young children playing outside in the summertime are generally at highest risk of a snakebite. Even a non-venomous snake bite can become infected and lead to illness.

Snakes are dangerous and in some cases, protected. To remove them requires specialist expertise and the right precautions. For this reason, it is essential to get the help of a professional pest control service to eradicate snakes.

Other pests related to Identifying Snakes