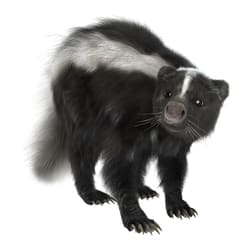 Striped skunks are stout little animals with stumpy legs. They have small heads, short, pointed snouts, and little black eyes. Their most distinctive feature is the white stripes that run along their backs and extend to the tips of their long, fluffy tails. Skunks usually grow between 50 and 80 cm in length and weigh just over 3 kg.

While most people are all too familiar with striped skunks, the smaller and scarcer spotted skunk is less well known. Sometimes called polecats or civet cats, these pests are members of the weasel family. They share striped skunks’ familiar fluffy tails, black or brown colouring, and pure white markings, though their patterns look more like dots or streaks. This pest is also more likely to be seen around woodlands and forests, as they are less comfortable near people.

Spotted skunks are skilled at burrowing, tunneling up to a foot underground to make their dens. As these pests frequently choose to burrow underneath porches, decks, and sheds, they can weaken foundations. Spotted skunks will defend themselves and their young by spraying foul-smelling, sticky liquid. Even more pungent than striped skunks, these pests’ odours can linger in yards for up to four months.

In basic shape and appearance, skunk tracks most closely resemble bear tracks, except they are much smaller. Like bears, skunks have a flat-footed walk, so the entire print makes an impression on the ground. This makes skunk track identification somewhat easier than picking out the prints of other, similar-sized animals. Skunk prints show five toes on all four feet. The long claws for digging on their front paws appear in tracks as small points in front of the toes. Large, rectangular heel pads on their back feet also have a second, smaller pad behind them that may appear as a single dot.

Although skunks do not hibernate in the winter, they are far less active and may stay in their dens for several weeks at a time. For this reason, seeing skunk tracks in the snow is a rare occurrence. They are sometimes confused with squirrel tracks, though squirrels only have four toes on their front feet. Muddy ground or fresh dirt disturbed by skunks as they dig for insects is the most likely to display their prints.

Distributed throughout the provinces, skunks are found as far north as the Northwest Territories and Nunavut. They live in farm fields, grasslands, forests, and urban areas. Although skunks are proficient diggers, they prefer to utilize the abandoned burrows of other animals instead of creating their own. In winter, skunks are very inactive and spend most of their time curled up inside their burrows until the arrival of spring.

Skunks in the City

Skunks are burrowing animals that, despite being timid, adapt surprisingly well to living among humans in urban areas. They are not skilled climbers, so homeowners don’t need to fear them getting into attics and chimneys. However, they will make dens under porches, decks, and sheds by digging as deep as a foot down. Canada is home to two species of skunks, the most familiar being the striped skunk found across the country. The other is the spotted skunk, which is found in the southern lower mainland of British Columbia. Other than the spotted skunk being slightly smaller and having a striped, more erratic pattern, the two species are very similar.

The nocturnal nature of skunks keep them mostly out of sight during daylight. Once they’ve settled on a property, the bulk of skunk damage comes from their digging up lawns in search of grubs and worms to eat. As opportunistic omnivores, they are also attracted to birdseed, pet food and garbage. It’s common for residents to smell skunk dens before ever seeing evidence of the animals. Signs to look for include holes 10 cm to 25 cm in diameter under buildings, decks, or wood piles.

Answering the question, “Where do skunks live?” is important for avoiding the dangers they pose. Skunks are known for spraying foul-smelling liquid as well as being capable of transmitting certain diseases. Due to this, it’s best for homeowners to trust the wildlife removal specialists at Orkin Canada to handle problem skunks.

While they prefer to use the abandoned holes of other burrowing pests, skunks may also opt to make their dens under decks, porches, and sheds. Skunk dens are used by adults when they give birth to young in the spring and also to avoid cold weather in the winter. Typically solitary pests, skunks can be drawn together during colder weather in these makeshift homes, sometimes with as many as 20 individuals living together. At times, these pests may even use rock heaps, wood piles, and crawl spaces under homes.

As opportunistic omnivores, skunks eat almost anything. In the wild, their diets include rodents, eggs, insects, worms, and plants. City-dwelling skunks help themselves to trash, fruits and vegetables from home gardens, grubs found in residential lawns, and small animals like mice and squirrels.

Mating occurs in the early spring, and mother skunks give birth to litters ranging in size from two to six kittens. Young skunks are capable of spraying their defensive stench at little more than one week old and are completely weaned from their mothers after a couple months. Striped skunks can live up to three years in the wild.

Why do I have skunks

In the wild, skunks live in farm fields, grasslands, forests. They are proficient diggers, but they prefer to use the abandoned burrows of other animals instead of creating their own.

In urban settings, they have adapted to living near humans and raid trash cans, gardens, outdoor pet food, and compost piles for food.

Skunks eat almost anything. In the wild, their diets include rodents, eggs, insects, worms, and plants. City-dwelling skunks feed on trash, fruits and vegetables from home gardens, grubs found in residential lawns, and small animals like mice and squirrels.

How worried should I be about skunks

When threatened or surprised, skunks release a foul smelling spray so powerful it can cause skin irritation and blindness. The oily musk is notoriously hard to remove and the stench of the spray is potent for several days.

Skunks can also eat garden fruit and vegetables, scatter trash everywhere, dig up lawns in search of worms, and transmit the rabies virus. To have a skunk removed from your property safely and humanely, you need a professional pest control service.

How can I prevent skunks invading

Look out for conical holes in the soil, Check for piles of dirt pushed out, Keep all trash cans secure, Remove bird feeders and pet food, Install fences buried into the ground, Secure gaps under decks and porches

Can a baby skunk spray

While it can take several weeks for newborns to be active, their ability to spray foul-smelling liquid develops within their first few weeks of life. Still, skunks only spray other animals and people when they sense threats. Since newborn skunks rarely leave their dens before they are weaned from their mothers, encounters with the young pests are infrequent.

Despite its curious nature, the striped skunk isn’t very good at climbing. Therefore, unlike squirrels and raccoons, they cannot easily infiltrate attics and chimneys. Instead, their stocky bodies are built for digging and catching bugs with tails that are ill equipped for balancing and climbing. Short, strong legs and tough claws help striped skunks scrape though dirt in search of food like grubs, earthworms, and insects. These burrowing animals inhabit clearings, pastures, fields, and other areas where the ability to climb isn’t particularly useful.

Spotted skunks, on the other hand, are smaller, lighter, and more agile than their striped cousins. Their claws have adapted to provide enhanced climbing abilities, which make them more likely to den in attics and chimneys. Spotted skunks climb up trees to eat honey from beehives and scurry up straw bales in search of rodents. Homeowners often despise their presence, as these climbing skunks can get into garbage cans just as easily as raccoons or squirrels.

Other pests related to Skunks