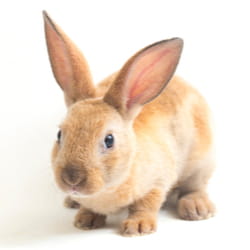 White-tailed jackrabbits are speckled and have long, distinctive, black-tipped ears. Arctic hares are one of the largest Canadian rabbit species and have thick white coats in the winter that aid in camouflage. In the summer, their coats turn a brown-grey colour.

Mountain cottontails have short, rounded ears and long hind legs, while snowshoe hares have wide hind feet that leave behind tracks that can easily be mistaken for snowshoes.

Fields, swamps, and woodlands are some of rabbits’ favoured habitats. As they have many natural predators, rabbits need places with lots of groundcover for hiding. They frequently burrow underground and hide in brush piles. Rabbits are comfortable living in residential neighbourhoods, as well, and are commonly found in parks, gardens, golf courses, and other green spaces.

As herbivores, rabbits eat grasses, clover, herbs, lettuce, peats, dandelions, and the leaves of saplings. In the winter, when these meals are not regularly available, their diet includes the bark of birch, oak, maple, and dogwood trees, along with twigs, stems, and buds.

Notorious for their breeding habits, female rabbits produce three to five litters each year. While pregnant, mothers rest in shallow nests lined with grasses and furs. They typically give birth after thirty days. Once the babies are two weeks old, they start to explore outside the nest but stick close to home until they’ve reached seven weeks of age. Rabbits can live up to seven years in the wild.

Why do I have rabbits

The most common rabbits in Canada are Eastern cottontails, White-tailed jackrabbits, Arctic hares, Mountain cottontails, and Snowshoe hares. They like to live in fields, swamps, and woodlands, with lots of groundcover for hiding or burrowing.

However, on the quest for food and shelter, rabbits often make their way to residential areas and are commonly found in parks, gardens, golf courses, and other green spaces.

How worried should I be about rabbits

Rabbits can ransack gardens and farms, nibbling on crops meant for human consumption and destroying expensive landscaping and plastic irrigation lines. Handling sick or injured rabbits can also lead to the transmission of rabbit fever.

However, rabbits are prolific breeders, with females producing litters of up to 14 offspring up to five times a year. It’s crucial to get the help of a professional pest control service as early as possible so your rabbit infestation can be eliminated quickly and for good.

How can I prevent rabbits invading

Erect high fences that go underground too, Remove collections of debris and brush, Use flashing lights as scare devices

Rabbits belong to the order Lagomorpha, while rats, mice, and other rodents are in the order Rodentia. Therefore, rabbits are not rodents.

Despite the taxonomic difference, the two pests are similar in some ways. In fact, both have large front teeth called incisors that grow continuously. Unlike a rodent, a rabbit has two sets of incisors. The smaller, second pair can be found directly behind the first.

Other pests related to Rabbits