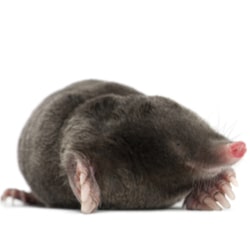 How to identify Moles

The pests range from 12 to 20 cm long and have dark grey or brown fur. Most also have slender, pointed noses. While often confused with voles, mice, or other rodents, moles are set apart by their large, scoop-shaped front feet and tiny eyes and ears that are hidden by fur.

Clear signs of mole activity include raised tunnels of dirt in yards and dying patches of grass or plants. Homeowners may also notice mounds of dirt in lawns, gardens, or fields. People usually don’t see the pests directly, since they rarely come above ground.

Due to their deep, complex tunnels, many pest control methods that work for other small mammals aren’t effective on moles. Chemical repellants are available, but it’s dangerous for individuals to handle those without supervision. For best results, trust the pest control professionals at Orkin Canada for safe, quick mole removal.

How to prevent Moles from invading

Maintain a healthy lawn to deter grubs, use castor oil or dense soil to repel moles, dogs and cats act as natural predators.

Canadians deal with moles from the east coast to the Manitoba border, as well as in the lower mainland of British Columbia. The pests thrive in woodlands, meadows, forests, pastures, and fields, as well as urban settings like parks, cemeteries, and yards. Moles like loose, moist soil that makes burrowing easy and attracts plenty of insects.

Moles must consume their body weight in food every day. Although they will eat plant tubers and seeds, the pests prefer grubs, worms, slugs, and other insects. Homeowners dealing with mole infestations typically also have an overpopulation of grubs in their yards.

During March and early April, moles give birth to litters of three to five pups. Young are most vulnerable to natural enemies such as coyotes, dogs, badgers, and skunks. Therefore, the pests stay with their mothers for 10 months until fully grown. They usually live four to six years.

How worried should I be about moles?

Moles cause damage by tunnelling along hedges, sidewalks, and walls as well as under lawns, flower beds, and shallow foundations. As they burrow, the pests expose plants’ delicate roots, creating dead patches in lawns and gardens.

Other pests like field mice, voles, and snakes often move into moles’ old burrows, causing added problems. To get a grip on a mole infestation – and any others that accompany it – you need an integrated approach from a professional pest control company.

Other pests related to Moles