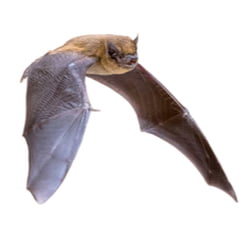 How to identify Bats

Bats are typically small, furry creatures with long, thin wings and large ears. Their wings are hairless, but their bodies are covered in glossy brown or black fur. Even though many people believe that bats are blind, the flying mammals can see despite their relatively poor eyesight.

Inside houses, bats can be heard rustling in attics or squeaking. Spotting their droppings on home exteriors also indicates the presence of bat infestations. Alternatively, homeowners can wait outside until dusk and watch for bats exiting attic roosts.

Attempting to handle bats can result in injury or illness. Inexperienced homeowners should never try to remove bats on their own. Instead, call the wildlife control experts at Orkin Canada. Our bat removal technicians can safely take care of bats in the attic, sanitize affected areas, and help seal the home against future bat infestations. Bats are a protected species under Canadian law, and it is best if they are managed and removed by wildlife professionals.

How to prevent Bats from invading

Ideal foraging sites for bats include open fields, marsh areas, and grasslands where they can freely hunt for insects. Bridges, caves, and rock crevices where the pests can hang from ceilings to rest during the daytime serve as the perfect roosting sites for communal species. Solitary bats may choose to roost in hollow trees or underneath overhanging ledges.

Using echolocation, bats hunt flying insects at night. Some of their favourite meals include moths, beetles, mosquitoes, and ants. The animals hunt all night long, often eating 100 percent of their bodyweight over the course of a single evening.

Baby bats are born in the spring or early summer. They are cared for by their mothers and cling to the roofs of their roosts until they grow old enough to fly and hunt on their own. During winter, bats either find a warm place to hibernate or migrate south to the warmer climates of the United States and Mexico.

How worried should I be about Bats?

Bat droppings, also called guano, can cause serious damage to your home. If enough guano builds up in your attic, ceilings can sag and collapse. Bat droppings also stain walls and cultivate the growth of histoplasmosis, an unpleasant lung disease.

Bats also have sharp teeth and are capable of biting when they feel threatened, which increases the risk of rabies which is a fatal illness that targets the brain and nervous system. Bats can also transmit other serious diseases including ebola, lyssavirus, nipah, and hendra viruses.

Note that, as well as being very dangerous to handle, bats are also a protected species in Canada, so their safe removal should be left to a professional pest control service, who will eliminate your bat problem in compliance with the law, and ensure they don’t return.

Other pests related to Bats