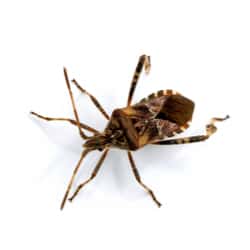 An adult western conifer seed bug is about 15 to 20 mm long. Its body can vary in colour from reddish-brown to greyish-brown with white markings. A key identifying feature is a white zigzag like line across the mid wings and alternating dark and white patches on both sides of the abdomen. A long, pointed feeding tube extends from its head and bends back between the insect’s legs when not in use. A another striking feature of this bug is the leaf-like extensions on the back legs.

The best way to detect the presence of western conifer seed bugs is to look for them on nearby pine trees. They often crawl on pinecones between late morning and early evening looking for a meal. The pests also tend to gather on home exteriors around windows or doors in the fall as they seek to enter indoors

The most effective control strategy for western conifer seed bugs is to prevent them from entering indoors by following the prevention tips outlined above. If found indoors, vacuuming and disposing is sufficient, with no need for treatment. However, an exterior treatment of the building will help to control them before they attempt to enter indoors. For such an exterior treatment contact the pest control professionals at Orkin Canada.

How to prevent Western Conifer Seed Bugs from invading

These insects are good at finding openings to enter a home, so repair or replace any ill-fitted screens, doors, and windows to keep them outside. Sealing gaps around these areas may also stop western conifer seed bugs from invading.

These pests once lived only in British Columbia but have expanded east as far as New Brunswick. Outside of Canada, they thrive along the Pacific Coast and down into Mexico. Some have even moved into Europe. Western conifer seed bugs make their homes in pine trees until winter, when they seek somewhere warmer.

After hatching from eggs, small groups of nymphs start feeding on the seeds in developing cones. As they mature, they begin to spread out and eat the seeds inside pinecones. Using their needle-like mouths, they inject an enzyme that liquefies the contents of a seed into a drinkable form.

One generation of western conifer seed bugs is born per year. Adults lay eggs from mid-June to early August. After about two weeks, nymphs hatch from eggs and take about five weeks to mature into adults. The previous generation dies at the end of the summer, and the new adults begin to look for a warm place to overwinter.

How worried should I be about Western Conifer Seed Bugs?

Despite the fact that they do not bite or sting, large numbers of western conifer seed bugs indoors are still a nuisance to homeowners. When disturbed, these pests release a strong, almond-like odour. Outside, when in large numbers, they can cause serious harm to a pine forest by eating seeds.