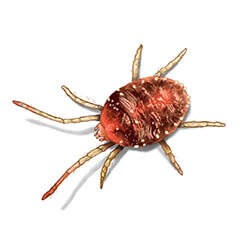 How to identify Mites

Similar in appearance to ticks but much smaller, mites have bulbous, round, or pill-shaped bodies. Classified as arachnids, mites have eight jointed legs. Their size varies by species, but most mites are usually invisible to the naked eye. The largest mites measure about 6 mm long, while the smallest are about 0.1 mm. The colour of mites varies greatly as well; most mites appear tan, brown, or reddish-brown, but some species are bright red, blue, or green in colour.

Mites live in nearly every habitat, including deep soil and aquatic environments. As parasites of birds, mammals, and insects, mites may spread wherever these host animals travel. Mites either live in the host’s nest or on the host itself.

Some species such as scabies and chigger mites may bury themselves under human skin. Mites that commonly affect humans often live in carpets, furniture, and mattresses.

Common household mites, like dust mites, feed on flakes of dead skin from humans and pets, but others mites do bite animals and in some cases, humans, to suck their blood.

How to prevent Mites from invading

Mites are ubiquitous and live in nearly every habitat, including deep soil and aquatic environments. As parasites of birds, mammals, and flying insects, mites may spread wherever host animals travel. These arachnids live either in the host’s environment, such as a bird’s nest, or on the host itself. Some species such as scabies and chigger mites can bury themselves under human skin and tissue. Mites that commonly affect humans often live in carpets, furniture, and mattresses.

Mites thrive by forming parasitic relationships with other organisms. Specific diets vary by species. Mites that are troublesome to humans feed on blood for sustenance. Most biting mites actually prefer to feed on other animals and resort to biting humans when alternative options are scarce. Common household mites, like dust mites, feed on flakes of dead skin from humans and pets.

The mite lifecycle consists of four stages: egg, larva, nymph, and adult. Eggs hatch into six-legged larvae, which molt several times before entering the eight-legged nymphal stage. As nymphs, mites molt an additional one to three times before maturing into full grown eight-legged adults. Development from an egg to an adult usually takes several weeks; however, under ideal conditions development time can shorten to just a few days. After reaching adulthood, mites may live for several months.

How worried should I be about mites?

While some mite bites can go unnoticed, others can be painful. Nearly all result in itchy red marks or rashes. Intense itching may occur, and scratching may lead to infection. Symptoms usually develop within a day and may last as long as a week.

Scabies mites can cause persistent, intensely itchy rashes, because the pests burrow into the skin to breed and then emerge to feed on flesh which can result in a severe medical condition.

The carcasses of dust mites, which live in carpets and furniture, can cause allergic reactions if inhaled, resulting in stuffy noses, watery eyes, and sneezing. Meanwhile, spider and eriophyid mites can damage crops.

It’s difficult to see mites, so you may not be aware of an infestation until it’s too late.