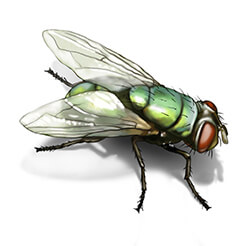 How to identify Flies

A typical adult fly has three body parts: head, thorax and abdomen. The colour and body size varies depending on species; most are small in size, typically measuring no more than 10 millimetres long. The head has a pair of compound eyes, a pair of antennae, and variously modified mouthparts. The thorax is the locomotor center; it bears a pair of functional membranous wings used in flight and three pairs of functional legs. The immature forms, called larvae, are tiny, cream-whitish, legless, and often worm-like.

Flies start life as eggs, which hatch into tiny, whitish, legless larvae, also known as maggots. These larvae then become pupae, enclosed in hard shells (puparium) from which they eventually emerge as adult flies.

The length of time it takes for a fly egg to develop into an adult fly depends on the temperature of the surrounding environment – the colder it is, the longer the life cycle will take.

Once fully grown, the life expectancy of a fly can be from eight days to two months, or in some cases, up to a year. One pair of mating flies can produce more than 1 million offspring in as little as six to eight weeks.

How to prevent Flies from invading

Flies generally live within close proximity to suitable food sources and breeding grounds. They feed on various food substances; however, most of the flies found in and around buildings feed and breed in warm, moist decaying organic matter. Small flies such as drain flies, fungus gnats, and phorid flies are commonly found in and around drains, leakages in slab floors, shower pans, sinks, and overwatered potted plant soils. Fruit flies tend to breed in decaying fruits and vegetables. Meanwhile, filthy flies such as house flies, dung flies, blow flies, bottle flies, and flesh flies visit and breed in garbage, trash bins, piles of compost or manure, and the carcasses of animals. Flies are attracted to light, so they often gather around windows when inhabiting indoor areas. Some fly species such as blow and bottle flies are known to fly long distances of up 20 miles in search of food and breeding sites.

Flies undergo complete metamorphosis consisting of egg, larva, pupa and adult stages. Sexual mature female flies lay eggs on suitable material; the number of eggs laid depends on the fly species. The eggs hatch into tiny, whitish, legless larvae also known as maggots that resemble tiny worms. After completing the larval stage of development, the larvae become pupae from which the adults develop. The development time from egg to adulthood depends on the temperature of the surrounding environment. Colder temperatures prolong the life cycle, while warmer temperatures shorten it. In general, flies complete the life cycle within a few weeks and live an additional few weeks or months as adults.

Where do they live?

There are over 15,000 species of flies in North America. Some of the most common domestic fly species in Canada include blow/bottle flies, cluster flies, drain flies, fruit flies, flesh flies, phorid flies and house flies.

How worried should I be about flies?

As many as 33 million microorganisms may flourish in a single fly’s gut, while a half billion more swarm over its body and legs. Flies can easily spread disease, because they move quickly from rotting, disease-laden garbage to exposed foods, food prep surfaces and utensils.

More than 100 pathogens are associated with the house fly including salmonella, staphylococcus, E. coli and shigella. These can cause typhoid fever, cholera, bacillary dysentery, hepatitis, ophthalmia, polio, tuberculosis and infantile diarrhea.

However, for every fly you see, there are an estimated 19 more flies hidden from view. If you are concerned you have a fly infestation, the best way to deal with it is to get the help of a professional pest control service who can accurately identify the species.