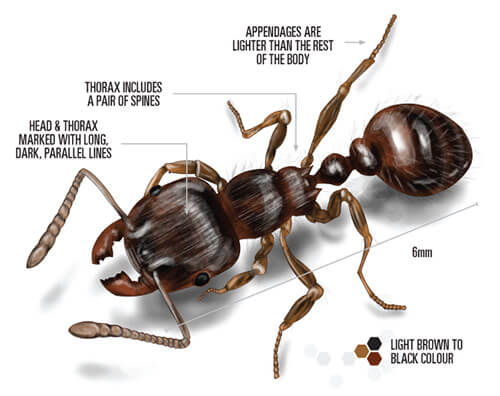 Pavement ants get their name because they often nest under sidewalks, driveways and building foundations. A mound of displaced soil along a paved area is probably a sign of pavement ant activity.

During the winter, pavement ants may nest inside structures near a heat source. Pavement ants are trailing ants and feed on a wide variety of foods including dead insects, greasy foods, seeds and sweets, including the honeydew of aphids.

Pavement ants are trailing ants and feed on a variety of foods, including dead insects, greasy foods, seeds, and sweets. They may forage as much as 9 meters from their nest.

The reproductive queens and drones have wings. They are commonly seen in the late spring and early summer months on their nuptial flights, both drones and new queens looking for mates.

Rival colonies can often be spotted amidst long battles along sidewalks, driveways, and other open areas as they each attempt to expand or defend their territories.

How does Orkin inspect for pavement ants

Orkin inspects the areas where ants have been seen to confirm activity.

Pavement ants love to build nests under slabs, so we concentrate inspections on slabs and masonry areas, both inside and outside. We look for little piles of dirt, as pavement ants often push up dirt from the soil below.

The ants may be invading to find food or water, so we inspect kitchens, baths, and other similar areas to locate activity. Note, pavement ants often forage for hundreds of feet, so we also follow their trails to try and determine where they are coming from.

Why do I have pavement ants

Pavement ants often nest under sidewalks, driveways, and building foundations, alongside garages and houses, and parts of houses which are constructed on concrete slabs.

In the winter, they invade homes seeking food and shelter, through small openings around windows and doors, basement walls, or concrete floors.

Once inside, they will consume a variety of foods, including dead insects, greasy foods, seeds, and sweets.

How worried should I be about pavement ants

Pavement ants can carry germs and disease and contaminate human and pet foods. They are one of the most commonly sighted pests in North America. By taking shelter under hard surfaces, they can return every year, season after season.

Contamination of human and pet foods is the primary concern, as ants can carry germs and disease.

For this reason, it’s important not to let an infestation get out of control. To truly eradicate pavement ants, you need a professional pest control service.

How can I prevent pavement ants invading

These tips may help you prevent pavement ants in your home. Firstly, seal openings around doors, windows and the foundation. Overhanging trees should be pruned or trimmed so that they are not in contact with the structure. Keep food preparation areas and floors clear of crumbs, and make sure your trash cans have tight-fitting lids.

Other pests related to Pavement Ant