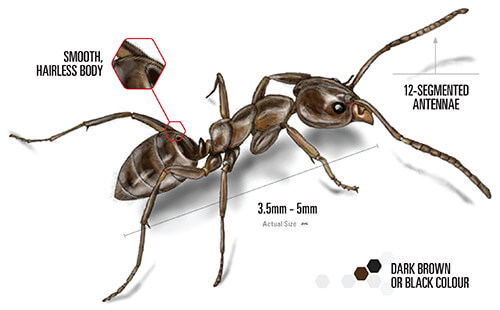 Argentine ants are an invasive species which has been carried by humans to many parts of the world. Although native to northern Argentina, Uruguay, Paraguay, and Southern Brazil, they have followed humans as far as North America, Australia, Japan, Europe, and South Africa. The typical worker ant is approximately 3 millimetres long and the queens can grow as large as 12 millimetres. Argentine ant colonies can have multiple queens, as many as 8 for 1000 ants, which gives then the ability to survive conventional pest poisons and household remedies.

A day in the life of Argentine ants

Argentine ants will attempt to establish colonies in cracks in the ground, in walls, in spaces between boards and timbers, and even among the belongings in homes and businesses. Unable to dig deeper nests, these ants will use small stones and loose leaf litter in natural areas to set up nests.

Argentine ant colonies are successful in part due to their genetic uniformity. Individual colonies rarely attack each other, and go as far as joining together and sharing workers. In 2009, researchers discovered that three supercolonies in Europe, Japan, and America are actually genetically related.

They are omnivorous insects with a preference for sweet or greasy foods, so much so that they have earned the nickname “sugar ants”. However, they will dine on meat, eggs, and even other insects and larvae.

Why do I have Argentine ants?

Argentine ants originate in South America, but are an invasive species which has been carried all over the world by humans.

They are attracted to moist areas and build shallow nests in floor cracks, wall cavities, or among the timbers under your home.

How worried should I be about Argentine ants?

Argentine ants are a nuisance that will get into your food, or that of your pet. They prefer sweet or greasy foods, but will also eat meat, eggs, and even other insects.

Argentine ant colonies have multiple queens that can lay up to 60 eggs every day, and unlike other queens, leave the nest to build new colonies.

Unlike other species of ants, Argentine ant colonies are also closely related and can share workers, with smaller colonies joining forces to make giant super colonies.

All of this gives Argentine ants the ability to survive conventional pest poisons and household remedies, so it is crucial to get professional help quickly to stop your home from being overrun.

How can I prevent Argentine ants invading?

Seal all cracks around your home, Clean and sanitize all surfaces, Clean up food, sources every day, Remove any yard debris and objects, Trim back trees touching your home, Clean gutters and downspouts.

Other pests related to Argentine Ants