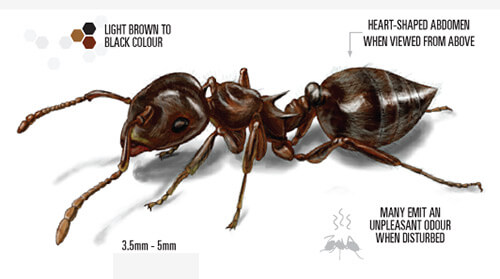 How to identify Acrobat Ants

When acrobat ants feel threatened, they raise their abdomen over the head and thorax as a sign of defence. The acrobatic configuration resembles that of a scorpion’s arched tail and gives the species its name. Various species of acrobat ants can be found throughout North America. They nest and shelter under rocks and wood, as well as in walls and structures already damaged by wood-boring insects, moisture, or fungi. As such, acrobat ants are often considered structure infesting ants.

In most cases, the typical acrobat ant infestation occurs in the yard outside the home rather than inside the structure. Coupled with the fact that the pests tend to seek refuge in existing wood galleries, sighting an infestation often proves challenging. Disturbing the colony members and provoking the release of their defence odour may serve as a primary means of detection. Residents of infested areas may also notice adult acrobat ants foraging for food indoors.

Once an acrobat ant infestation becomes established in the home or business, removing the nest provides the best way of eliminating the problem. If removal cannot be accomplished without issue, calling a pest control professional to treat and control the infestation s is usually the easiest and most effective option.

How to prevent Acrobat Ants from invading

As acrobat ants prefer to live in moist, decaying wood, the best way to prevent their presence is to remove this type of habitat from buildings and lawns. Fix leaky pipes and sites of moisture build-up, and regularly check for other wood-boring insect activity. Store all food in tightly sealed, ant-proof containers. Trim trees and shrubbery around the outside of the home so the branches do not touch or hang over the structure. Seal any cracks in the building foundation with caulk, and replace broken window and door screens.

Acrobat ants favour moist wood softened by decay and/or fungi for nesting. Other common nesting sites include under rocks, in logs, firewood, trees, wall voids, baseboards, and door and window frames. Because they thrive in cities and other places with high levels of human activity, the pests are found throughout the world.

In their natural environment, acrobat ants feed on honeydew, mealybugs, and a variety of live and dead insects. Within manmade structures, the pests target sweets, like fruit, and high-protein foods, such as meat.

Extremely territorial, acrobat ants will not tolerate the presence of more than one colony at a given nesting site. However, colonies in close proximity will coordinate with one another. Each colony contains a single queen and as many as thousands of workers. Despite the general lack of information regarding their specific reproductive practices, acrobat ant colonies are known to produce swarmers just like any other ant species. During the right weather conditions, the winged swarmers leave their nests to mate and look for appropriate places to begin new colonies.

Why do I have acrobat ants?

Acrobat ants nest and shelter in moist wood structures softened by decay, fungi, or wood-boring insects. This can mean they often invade wall cavities, wood galleries, baseboards, doors, and window frames, or in the yard, logs, firewood, and trees.

In your home, these ants target sweet foods, like fruit, and high-protein foods such as meat, while in the wild they prefer honeydew, mealybugs, and a variety of live and dead insects.

How worried should I be about acrobat ants?

Acrobat ants can exacerbate the existing structural damage left by other wood-boring species, and can also strip the insulation from electrical and telephone wires, which increases the risk of power shorts and outages. When threatened, they may bite.

Acrobat ant colonies build their nests in yards or in wall cavities, so it can be difficult to spot an infestation, even through a colony can have thousands of workers supporting it.

Removing any nests you see can begin to eliminate your acrobat ant problem, but to truly be sure all nests have been cleared and your acrobat ant infestation is eradicated, you need a professional pest control service.

Other pests related to Acrobat Ants