Once upon a time, bed bugs played little more than a bit part in a children’s nursery rhyme. But since they scuttled out of obscurity into the limelight more than a decage ago, the North American public has found it hard to sleep tight. Bed bugs have inspired everything from disgust and dread, to myths and misconceptions – not to mention making heir fair share of headlines.

Bed bugs are peculiar. It’s not surprising these creepy creatures sparked panic among their human hosts, who found themselves fed upon in the dark of the night while seemingly safe in their beds. For a time, people felt like they could escape the pests by the light of day. That’s until bed bugs started showing up in offices. And in retail centers. And theaters. And libraries. Though it sounds like a Hitchcockian horror movie, it’s just a typical day’s work for your Orkin Canada technician.

We were early observers of the reemergence of bed bugs, and we’ve been on the frontlines of the battle against them ever since.

From our learnings, we rounded up 100 facts about bed bugs! To give you a little preview of some of these bed bug facts, we’ve listed 10 interesting facts from our top 100.

Looking to learn the other 90 Bed Bug FACTS? Click here to get learning. 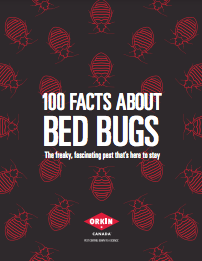 Bed bugs are extremely efficient hitch hikers. They can move easily across a room and climb onto luggage or anything left on a bed in just one night.

The 5 Most Interesting Facts About Bed Bugs

Bed bugs are increasingly common in residential settings, but that doesn’t make them any more comfortable to deal with. These crawling critters are out for blood (literally), and they’ll stop at nothing to get it from you. And let’s be real—no one wants to wake up with a bunch of painful bite marks. When dealing with bed bugs, it helps to be informed so you know what to expect. That’s why we’ve combed over Orkin Canada’s massive bed bug knowledge database and picked out five key facts every homeowner should learn about these nighttime nuisances.